Editor’s note: This article originally appeared on Strong Towns and is republished with permission.

When was the last time you had to move something that you couldn’t carry with your own two hands? Maybe it was a big haul of groceries, a new piece of furniture, or a large bag of dirt for your garden? How did you make that trip from the supermarket, the furniture store, or the garden center? My guess is that you took your car or, if you don’t have a car, perhaps you negotiated to borrow a friend’s truck or paid to take a rideshare.

A few weeks ago, I was chatting with my brother Michael, who’s lived in Berlin for the last couple of years, and he casually mentioned that he had just been to pick up a bunch of wood from the hardware store for a new bed he’s building himself. The mode of transportation he used to pick up that wood was a free cargo bike — one of dozens that are located all over the city and available for use from anyone who needs them.

This sounded like such a simple and brilliant solution to a challenge that anyone without a car (or who shares a car with other family members and can’t always use it) has probably faced. So I wanted to share a little about the program with you here. Please hold your “that’s Europe, we could never do it in America” judgements until the end.

To start with, let’s talk about cargo bikes. The ones in this Berlin program are simply bikes with a large open box attached to the front that can hold a surprising amount of stuff. They’re built to make pedaling seamless and easy with whatever load you’re hauling. As you can see from these photos, they can carry anything from a Christmas tree to a mattress to your children.

Michael explained how the program, called fLotte Berlin (“fleet Berlin”), works: You register online and sign a basic “terms and agreements” sheet. Then you’re free to peruse the live map that shows what bikes are available where. These bikes are housed at an assortment of shops and public places like grocery stores, parking lots, and even pubs. You can book immediately or reserve ahead for a future date. For his wood pick-up, my brother selected a bike that happened to be kept at a bookstore and when he arrived, he simply showed the bookstore employee his ID and she brought out the bike for him. 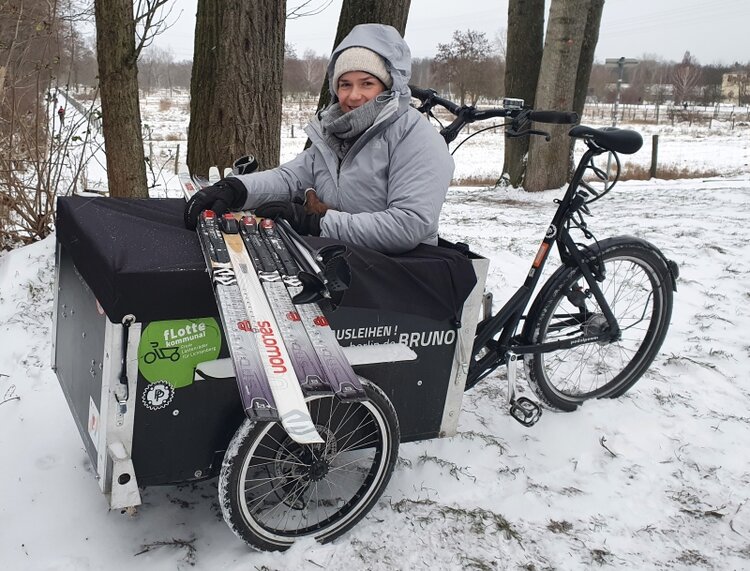 One thing Michael said he appreciated about the program is that, “it’s all day—not one of these ‘you can have it for 30 minutes and then it has to be returned’ things.” That made his trip easy because he didn’t have to worry about rushing back within a given timeframe. We all know how deliveries and pick-ups—especially with bulky objects—can take longer than we’d planned on by the time you’ve figured out how to maneuver the thing out of the store and into your vehicle. Based on photos of the bikes in use, I can also see that some people are using them to take day trips to go sledding or skiing — again, a situation where a full day of access simplifies things.

Another huge asset to the program, Michael said, is that it’s completely free to use. You don’t have to put a credit card on file or pay by the hour. In the case of fLotte Berlin, the bikes were paid for by the local government (through an environmentally-focused fund) and the program is managed and maintained by a nonprofit bike advocacy group, Der Allgemeine Deutsche Fahrrad-Club (the German Cyclists Association). They’ll even send a volunteer out to your bike for emergency maintenance if you break down mid-ride.

I remember the summer when I moved into my first real grown-up apartment after college. My then-boyfriend/now-husband and I were furnishing our place with the bare minimum of items we could afford from thrift stores and the side of the road. We didn’t own a car, so I walked to Goodwill and found a decent bedside table for $10, only to exit the store and realize I was never going to be able to carry the thing home on my own. I ended up calling a Lyft and awkwardly sticking the table in the driver’s trunk, praying I wasn’t going to dent his vehicle in the process and thankful that he allowed me to use his trunk at all. A cargo bike I could operate on my own would’ve made that whole experience so much easier and cheaper.

This bikeshare program — much like a tool lending library — makes sense because cargo bikes are quite expensive and most people wouldn’t need or want one for daily use. It’s just those occasional moments when you’re trying to bring home a big bag of dog food from the pet store or deliver a pile of baby items to a friend who’s expecting.

While the program was founded only a few years ago, fLotte Berlin currently boasts almost 19,000 registered users and my brother said that, now that he’s aware of it, he’s starting to notice the cargobikes everywhere. According to the fLotte website, the average trip on one of their bikes is about 9 miles—far enough that you’re definitely not going to walk it (especially not while carrying something big), but not so far that it’s a grueling ride. This bikeshare program is perfect for brief trips within a small town or city.

Ok, so now here’s the part where you say, “But that’s Europe. How could it possibly work here?” Cargo bikeshares like fLotte Berlin are indeed present all over Europe and I have yet to see them take root in the US. Why is that? Part of the reason is just that cars—not bikes—are the standard mode of transportation for most Americans, because we’ve built our cities around the car. But that doesn’t mean we can’t shift things gradually.

Realistically, I think a program like fLotte would make the most sense in a town or city that has a good bit of its traditionally developed downtown/main street core intact. Those tend to be places where biking feels safer because streets are more narrow, inducing slower traffic, and where destinations are closer together (compared to a suburban stroad-filled area). Another great place to pilot a cargo bikeshare might be a college campus. Think how many students would appreciate access to a free pedal-powered vehicle to help lug a stack of books home from the library or bring a bunch of food to a potluck. In places where many residents don’t have access to a car, a cargo bikeshare program could make a real difference. 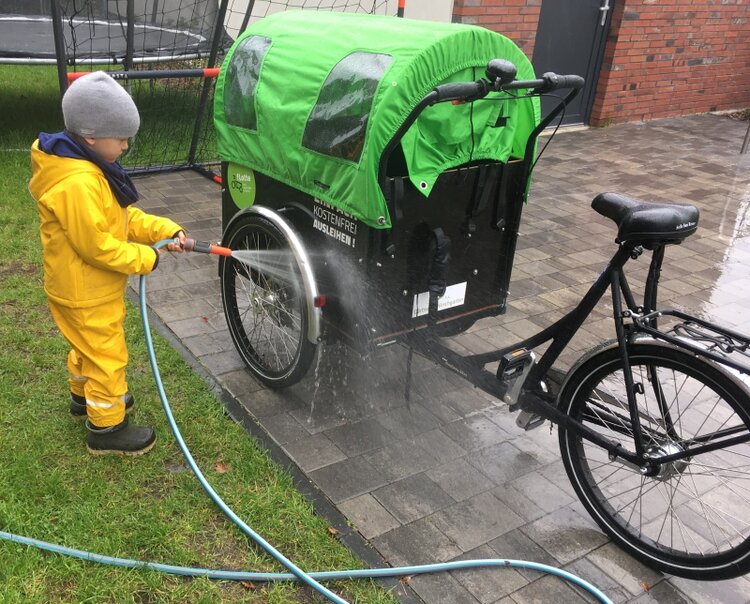 My brother did point out one reason that such a program might be a little more challenging to pull off in the US: a cultural one. Germans just tend to be a bit more rule-abiding, in his experience. “In Germany, it’s not like the US where people would try to get away with as much as they could,” Michael says, “If you ruined the bike, you would know that, as a German, you weren’t getting away with it.” (As an example of this rule-abiding culture, my brother has shared stories about seeing someone drop a piece of trash in his neighborhood, only to have another person walking down the street scold them and tell them to throw it in a garbage can.)

His point is that the bikeshare program works on a free basis because people who use it are collectively invested in its success, taking good care of the bikes and not trying to steal them. As it says on the fLotte Berlin website (translated from the German): “The fleet is a voluntary project that only works as long as everyone participates in a respectful and appreciative manner.” Low-income and BIPOC workers are more dependent on bikeshare to get around during the pandemic than their wealthy, white counterparts, a new study finds – but the location of docking stations doesn't always prioritize their travel needs. Bikeshare traffic across the Allston and Fenway neighborhoods more than doubled after a city project added protected bike lanes on Commonwealth Avenue. Furthermore, the fastest growth involved trips that would have been likely to use the newly-built protected bike lanes.
We’ve noted before that it can be challenging to figure out exactly how much driving is avoided when someone rides a bike. But here we have it straight from the horse’s mouth – nearly 7,000 horses, in fact. According to a November 2012 survey of Capital Bikeshare members, released today, the average subscriber drove 198 miles […]
One of the criticisms you hear about bikeshare systems is that they will only replace trips that would otherwise have been by walking or taking transit. But Capital Bikeshare keeps confounding the critics. The full picture is much more complex and interesting, with Cabi replacing bus and rail trips but also leading subscribers to use […]