Why French and US Road Deaths Went In Dramatically Different Directions

Editor’s note: This blog post was originally published on Urban Wire, the blog of the Urban Institute and is a part of a three part-series. Check back in the days to come for parts two and three.

In 2021, almost 43,000 people died in traffic crashes in the United States — the most since 2005. This increase is partially attributable to Americans driving more miles than they did in 2020, when many stayed home because of the COVID-19 pandemic.

This made choosing to walk riskier; more than 7,300 were killed, the highest number in at least 30 years. The rising death toll comes after dozens of US cities committed to the “vision zero” goal of eliminating roadway deaths.

In communities across the country, residents are starting to ask whether rising traffic fatalities are unavoidable. They’re staging protests and asking elected officials to find the means to reshape city streets around safety rather than speedy vehicular movement.

To identify potential recipes for success, we compared changes in traffic fatalities in the US over the past few decades with those in France, whose per capita death rates were similar as recently as the 1990s. The French government’s investment in better enforcement against speeding, reductions in speed limits, and creation of safer walking routes, such as in pedestrianized city centers, have successfully reduced traffic deaths there far more quickly than stateside, saving thousands of lives. American states and cities can look to the French example for approaches to improving road safety.

France’s roads were once as unsafe as ours

In the late 1970s, people living in France and the US had about the same probability of being killed in traffic: for every million inhabitants, about 225 people died in each country. Most died as automobile occupants, motorcyclists, pedestrians, or cyclists.

Since then, conditions have improved in both countries, with both experiencing a 31 percent decline in fatalities from 1979 to 1994. This safety success was driven by technologies like seat belts and air bags, plus roadway infrastructure improvements.

But after 1994, the two countries’ trendlines diverged. US traffic deaths reached their nadir in 2014, having declined an additional 34 percent over the previous two decades. Unfortunately, the past few years have reversed those trends: Americans in 2021 were 25 percent more likely to die in traffic than they were just seven years before.

But in France, traffic deaths continued declining. In fact, this trend reversal for traffic deaths is unique to the US compared with other developed countries. Among the G7 nations, the US was the only one where traffic fatalities increased over the past few years.

France’s story is more indicative of global trends—it’s in the middle of the pack on traffic fatalities compared with countries like Australia, Germany, Italy, Japan, and the United Kingdom. Although US per capita traffic fatalities increased since 2014, they declined by 15 percent in France. As of 2021, Americans are almost three times as likely to die in a traffic crash as French people. 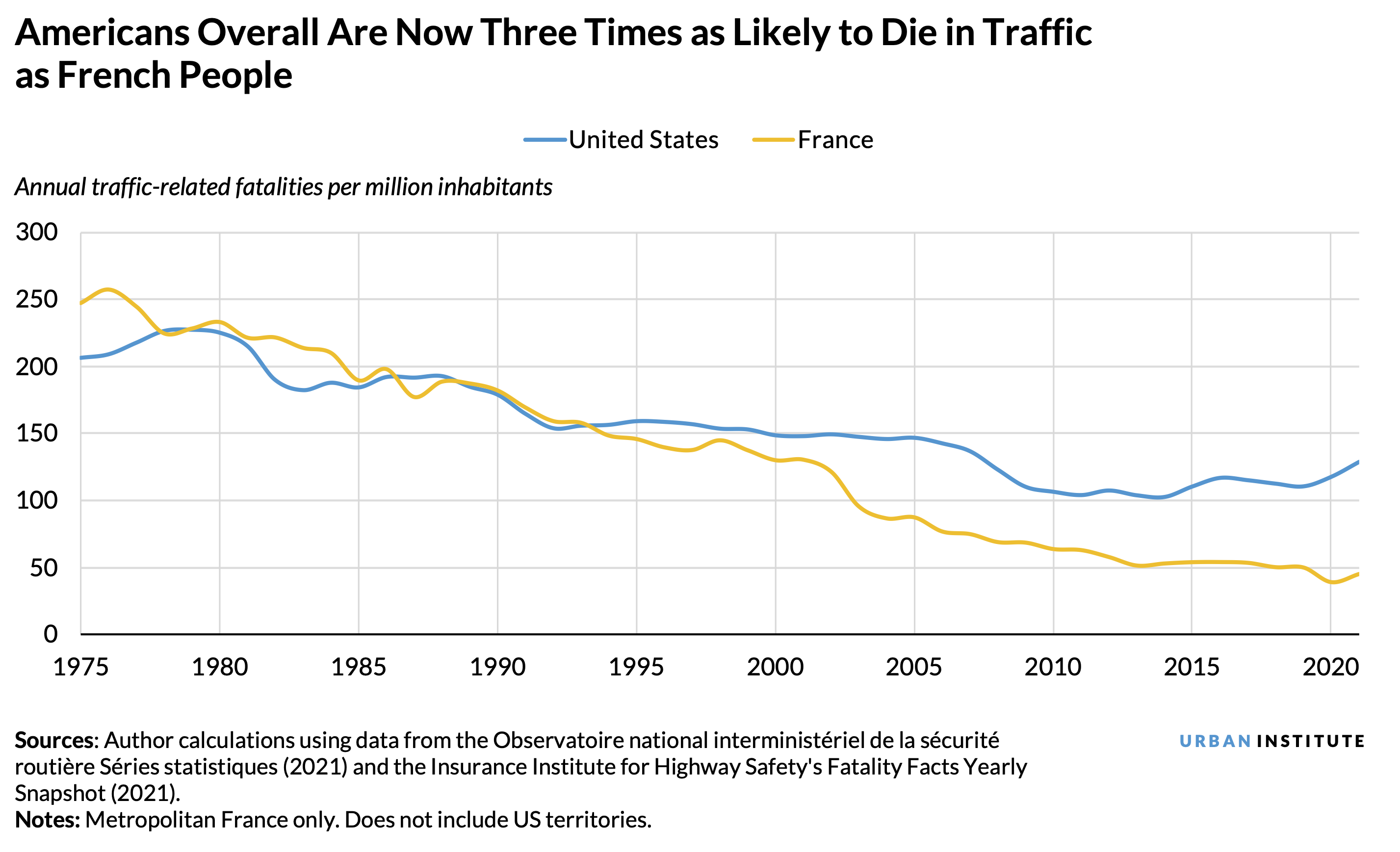 We calculated that, had the US per capita traffic death rate remained the same as France’s since 1994, the US would have had 387,000 fewer deaths by 2021. That’s roughly equivalent to the population of Cleveland, Ohio, or New Orleans, Louisiana.

It’s easy to assume these data are the result of Americans simply driving more than French people. In 1990, when residents of France were about as likely as Americans to die in traffic overall, that might’ve been true: French people then drove half as many miles per capita as Americans. That means, per mile traveled, French people were twice as likely to die on the roadways.

But the situation has dramatically changed in the years since. French people continue to drive significantly less than Americans, but they now are 40 percent less likely to die per mile driven.

Had the US traffic death rate per mile traveled been the same as France’s since 2012, at least 75,000 fewer Americans would have died on the roadways. Many more lives would have been saved had Americans driven less. 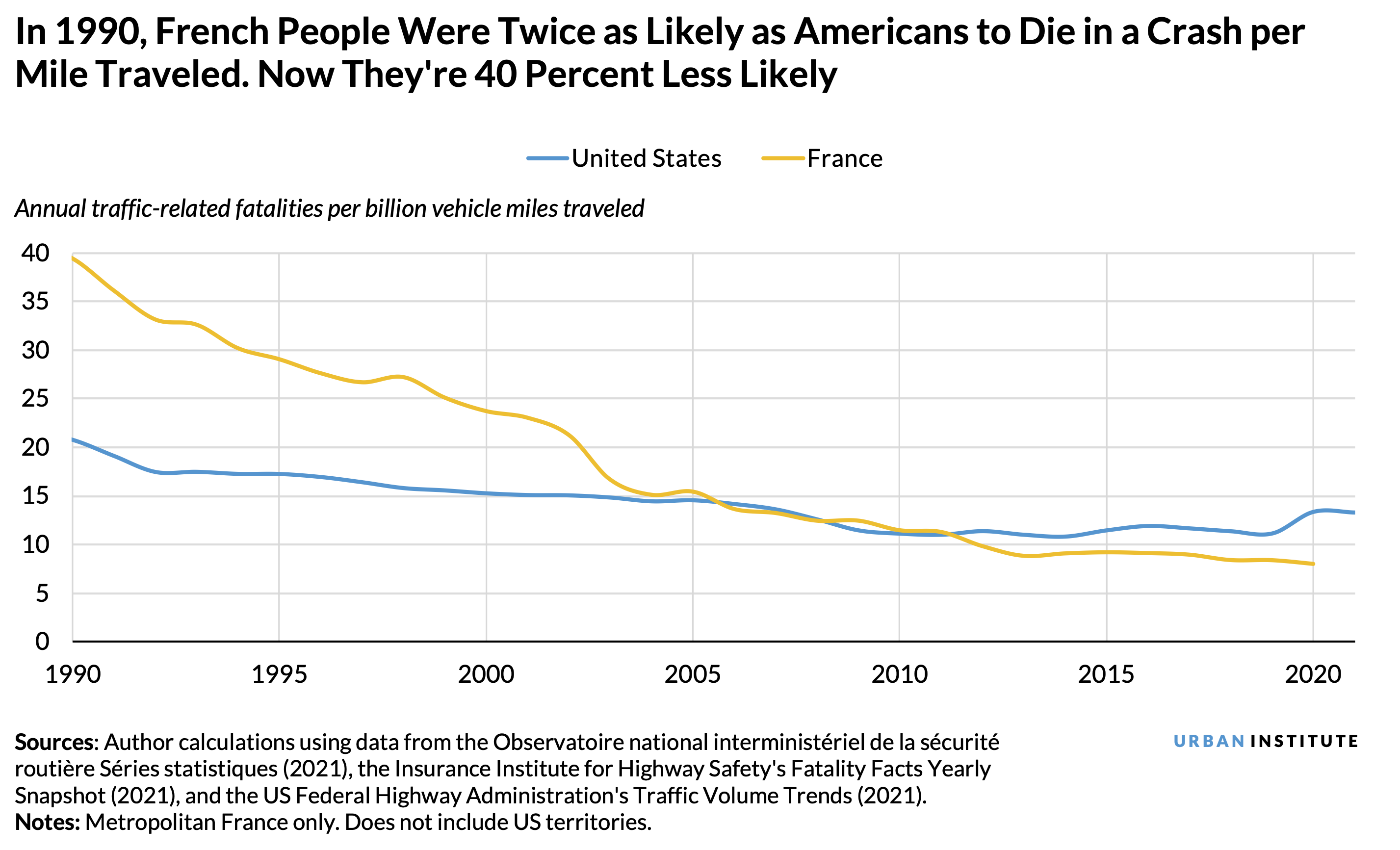 These comparative trends are particularly stark when it comes to pedestrians, perhaps the most vulnerable people on the roadway.

But the opposite is true. Although in the late 1970s, France had significantly more pedestrian fatalities in relative terms compared with the US, as of 2021, it had less than one-third as many deaths per capita.

Had the US pedestrian death rate been the same as France’s since 1990, the US would have had 60,000 fewer dead pedestrians by 2021. That’s equivalent to every US pedestrian killed in the last ten years. 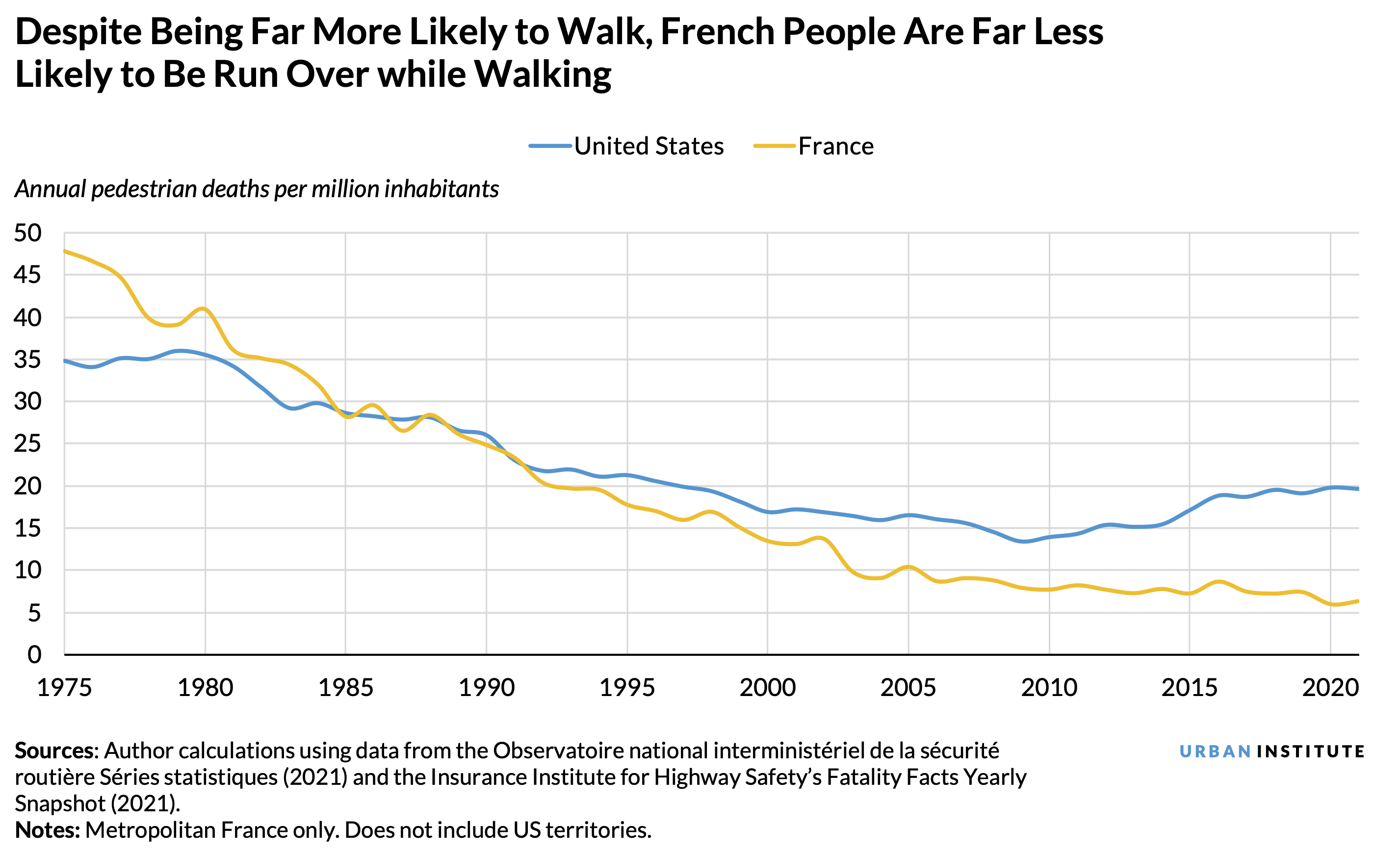 There is nothing inevitable about the US’s recent rise in traffic fatalities. France has shown over the past few decades there is significantly more policymakers can do to achieve the vision zero goal.

States and cities in the US can also think more broadly about how to encourage fewer people to drive. Creating walkable communities where pedestrians feel — and are — safe will save lives.

The National Highway Traffic Safety Administration (NHTSA) reported last December that while overall traffic fatalities in the United States dropped in 2010, pedestrian deaths rose higher – up four percent in 2010 over 2009. Yesterday, the agency released some more detailed statistics about those crashes [PDF], but the report includes scarcely any data or analysis about the underlying […] More Americans have been dying on high-speed roads because cities and states haven't built proper infrastructure to help people cross safely, a new study shows.
Pedestrian deaths rose 10 percent in the first half of 2015 compared to the same period the year before, according to preliminary data released by the Governors Highway Safety Association. If that increase held up over all 12 months of 2015, it would be among the worst single-year changes since the GHSA started collecting data in 1975. In a typical year, […]
It’s good to know it’s not just Chicago thinking about new ways to protect pedestrians. Sunny Orlando, the country’s most perilous place to travel by foot, is cracking down on motorists who pose a threat to the most vulnerable class of road users. This East Orlando Sun article was referenced today by Network blog Baltimore Spokes, with the […] A new documentary aims to tell the dramatic story of America's escalating pedestrian and cyclist death crisis — and, hopefully, inspire non-advocates to get involved in the movement to end the epidemic.