Editor’s note: This blog post was originally published on Urban Wire, the blog of the Urban Institute. This is the third segment in a three-part series; don’t forget to click back to read parts one and two.

In late April, a heat wave ripped through India and Pakistan, leading to “wet bulb temperatures,” a combination of heat and humidity that can kill humans and animals outright. Dozens of people died, power outages proliferated, and birds dropped from the sky as the heat wave persisted for more than three weeks.

Although a heat wave of this magnitude is historically unmatched (April hasn’t been this hot in India for more than century), it’ll likely become more common over the coming decades. Economic and industrial activity has increased carbon dioxide levels to their highest point in human history and generated extreme weather, like heat waves.

The most recent assessment report (PDF) of the Intergovernmental Panel on Climate Change lays out the crisis clearly: the path to limiting warming to below 1.5 degrees Celsius, the preferred goal of the 2015 Paris Agreement, is rapidly closing.

Because of its size and current emissions, the United States has work to do to meet this challenge. It is the world’s second-largest greenhouse gas emitter, contributing 15 percent of global emissions despite having only about 4 percent of its population. And transportation is the largest single emitter, with cars and trucks driven by Americans leading the way.

But the US transportation sector isn’t adapting quickly enough to the climate crisis by reducing emissions. A better adaptation strategy will require not only shifting how people move by getting them out of cars and onto bikes and public transportation, but also replacing the vehicle fleet with more efficient automobiles that are less reliant on fossil fuels.

Policymakers in the US can learn from carbon-based vehicle taxation policies in France and the United Kingdom—where, spurred by these regulations, more than one-third of the new car market is now constituted of electric or hybrid cars—to spark a rapid shift toward more environmentally friendly vehicles. This is one of several measures, including emissions taxes, that can contribute to a successful response to the climate crisis.

The average car sold is becoming more efficient — but the sale of big trucks and SUVs, combined with more miles driven, is increasing emissions

Although new US car models in 2020 averaged more than 25 miles per gallon, a significant increase in efficiency (PDF) compared with 15 years ago, overall greenhouse gas emissions from cars in the US increased by 10 percent between 2005 and 2019. One explanation for the emissions increase is a steady expansion in the number of milesdriven by Americans, which ballooned by 9 percent over that time.

The specific types of vehicles driven have also contributed to the climate problem. Between 2010 and 2018, researchers found that SUVs were the second-largest contributor to the global emissions increase, adding 544 megatons of carbon dioxide over that time. To contextualize that number, Guardian writer Oliver Milman observed, “If all SUV drivers banded together to form their own country, it would rank as the seventh largest emitter in the world.”

US Corporate Average Fuel Economy standards have required automobile manufacturers to increase vehicle efficiency over time, but these standards differentiate between “passenger cars” and “light trucks,” which includes SUVs. The most recent iteration of the rule (PDF), for example, will require passenger cars to achieve 59 miles per gallon by 2026, but it will only require light trucks to achieve 42 miles per gallon (the European Union has similar, but stricter, rules, and early in June, the European Parliament approved a ban on the sale of fossil-fueled cars by 2035).

The difference in regulations by vehicle type creates the perverse incentive for automakers to market and sell heavier pickup trucks and SUVs. As one consequence, light trucks now constitute 75 percent of the US new car market. Not only do such big vehicles pose major risks to walkers through steadily increasing pedestrian fatalities, but they also are heavy polluters. Few new cars sold are electrified. The US vehicle fleet isn’t moving quickly to reduce emissions.

Evidence from abroad demonstrates the limited effectiveness of US efficiency standards in reducing emissions. 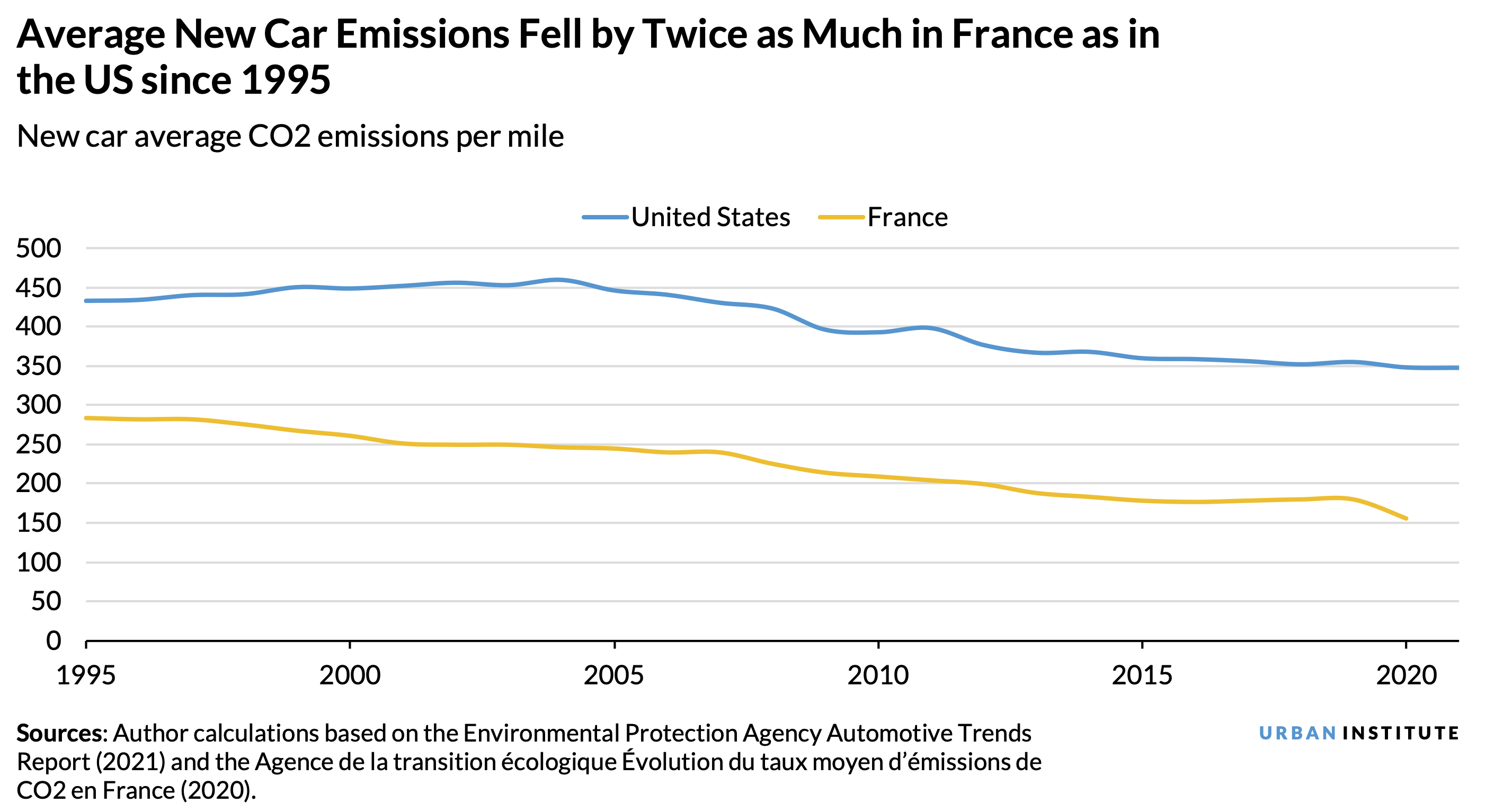 One explanation for France’s success is the upfront fee on cars with high carbon emissions the government enacted in 2008. That costs vehicle purchasers up to €40,000, or up to 50 percent of a car’s purchase price. The rates increase exponentially with emissions above 128 grams of carbon dioxide emissions per kilometer, and the government has substantially increased rates over the past few years. If the baseline Ford F-150, the most popular vehicle sold in the US, were sold in France, it would cost buyers up to €35,000 in extra fees (depending on the F-150 model purchased) because of its high carbon emissions. As of 2021, about 30 percent of new car purchasers in France pay such fees.

This French carbon fee is layered on top of a weight charge on heavy vehicles that has been in place since 2020. And it also includes a rebate of up to €5,000 for those who instead buy nonpolluting electric vehicles. The US has a similar tax credit of $7,500, but it no longer applies to buyers of cars from the most popular electric car manufacturers like Tesla or General Motors.

A similar fee—though at a smaller scale—has been in place in the United Kingdom since 2001. There, buyers of the most-polluting cars (those with emissions of more than 255 grams of carbon dioxide emissions per kilometer) must pay a surcharge of £2,365 in the first year of purchase. Over five years, that surcharge and annual registration fees can add up to £4,445 for expensive cars, compared with £0 for electric vehicles.

Researchers have found that the UK’s vehicle registration fee has increased (PDF) the adoption of low-emissions vehicles. Indeed, when comparing the uptake of new hybrid electric, plug-in hybrid, and fully electric cars in the US, UK, and France, we found the two European countries have been far more successful. Whereas less than 10 percent of US vehicles sold in 2021 were hybrid or electric, 46 percent of those in the UK and 36 percent of those in France were. 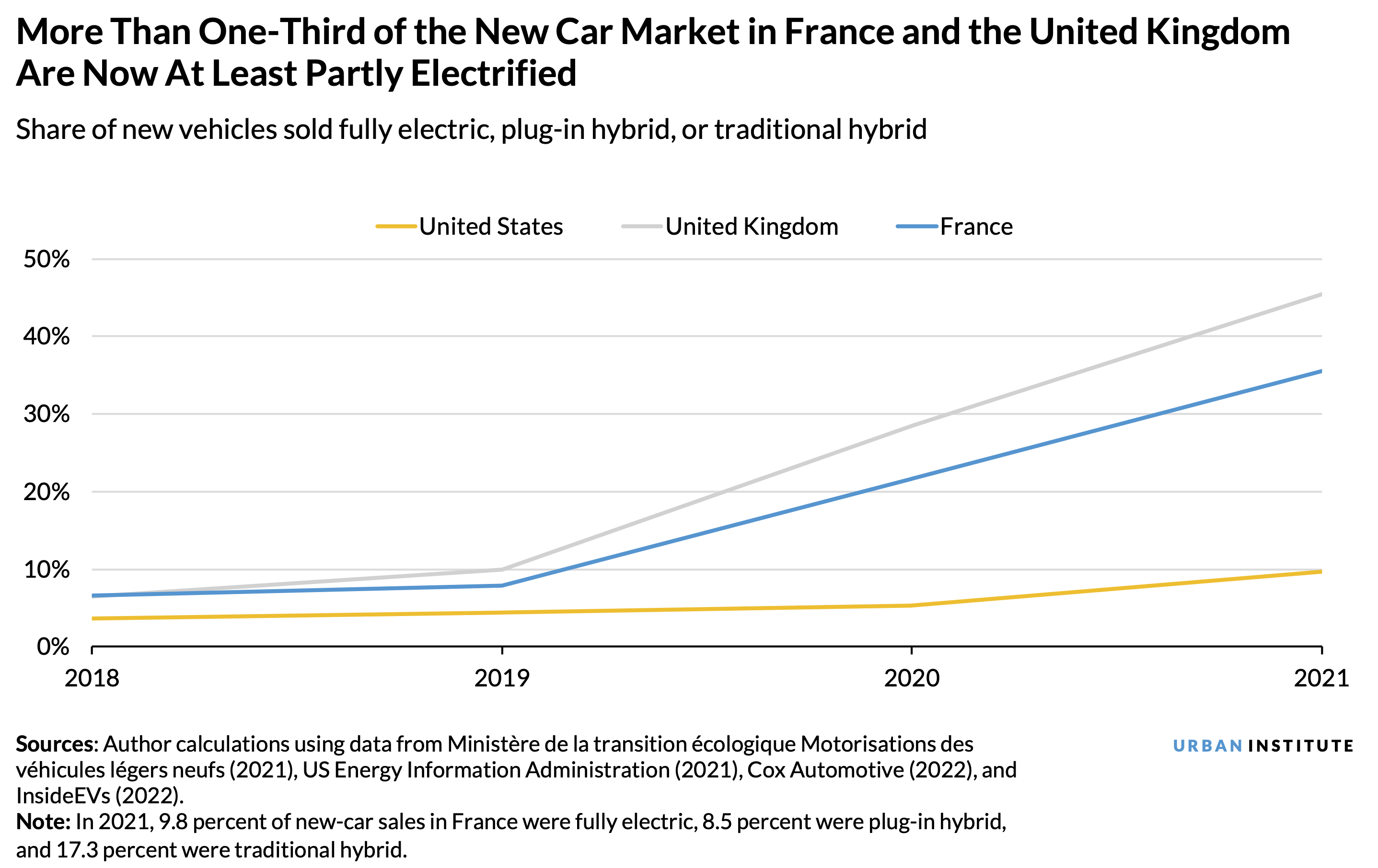 Importantly, in both countries, carbon emissions taxes are in effect, applying not only to gasoline but also other sources of energy. These taxes, combined with higher motor fuel taxes than in the US, increase the cost of operating carbon-intensive vehicles like heavy trucks, beyond initial purchase costs. Buying an electric vehicle reduces operations expenses for buyers to some degree, but a climate-friendly shift also requires that the energy that powers those cars is renewably sourced.

The examples from France and the UK demonstrate the potential for a rapid shift to a more environmentally friendly, less-polluting car fleet. Some US states, like California, are promoting faster change, with policymakers hoping to achieve a 35 percent new-vehicle electrification share by 2026. And California is moving much more quickly than other states already, with about 26 percent of new cars sold there in the first quarter of 2022 being electric or hybrid. To further this progress, states and cities across the US can consider the following:

Tax policy that targets the most-polluting cars is just one factor in reducing transportation emissions. Even electric cars produce dangerous particulate pollution from tire and brake wear and rely on batteries with minerals whose mining degrades ecological systems. Getting more people into zero-or-low-emissions alternative modes, like walking, biking, and public transportation, is an important complement to a vehicular electrification strategy.

Oregon plans to reduce parking regulations in cities. What can we learn about the effect of parking lots on urban heat islands?
If the "Green New Deal" only focuses on reducing emissions from cars and trucks, it won't go far enough.
It takes more than lip service to lead the fight against climate change.
A secretive network of activists are deflating SUV tires in urban neighborhoods around the world to physically force their drivers to find less dangerous and polluting ways to get around — and in the process, they're prompting a conversation about the role of illegal direct action in the movement to end car dependence.
"Taking into account the carbon generated by making the vehicle, fuelling it and disposing of it, we found that emissions from cycling can be more than 30 times lower for each trip than driving a fossil fuel car, and about ten times lower than driving an electric one."
Washington is the first city in the nation to propose a targeted charge by vehicle weight, but even that ambitious policy falls short of similar weight charges in other countries.