How To Bring ‘Zero Auto Ownership’ Out of the Shadows

Editor’s note: A version of this article appeared on Bike Portland and is republished with permission.

Cars are so ubiquitous in the United States it’s hard for some people to believe it’s possible to live without one. But in order to meet a host of urgent local, regional and national environmental and public health goals, we must drastically cut down on vehicle miles traveled. In short: people need to drive less.

Developing a system where people without cars can have the same kinds of experiences in the outdoors as people who do is crucial.

Luckily, while cars are ever-present in American society, not everyone actually owns a car. Transportation engineer Randy McCourt presented data Wednesday at the Oregon Active Transportation Summit (hosted by The Street Trust) that revealed more about who is carfree, how they do it and what we can do to encourage no-car living more broadly. 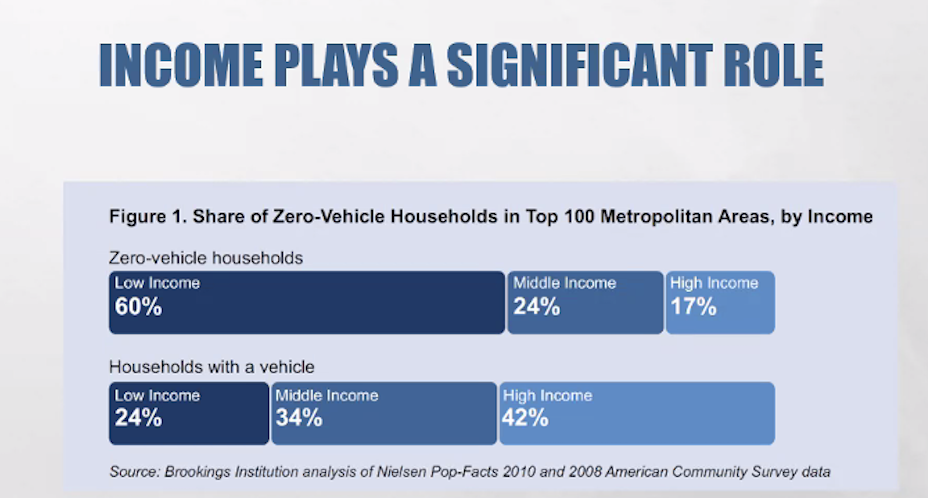 So what are the factors leading people toward or away from zero auto ownership? One important element is income. We are currently seeing initiatives underway across the country to provide financial resources for people burdened with the cost of higher gas prices. Some of these proposals also include some money for public transit, but usually presented as an afterthought.

But when you look at the data, it’s clear that low-income households are, in fact, much less likely to own a car. The chart at right shows that on average across the country, 60 percent of zero car households are low-income.

It follows that places with high walk-bike-transit scores have higher numbers of zero auto ownership households. While it’s good to point out this relationship, it’s not particularly groundbreaking: a key component of active transportation advocacy is that investing in alternate transportation encourages people to drive cars less.

McCourt also brought up the commuting trends developed during the pandemic, saying he thinks working virtually has the potential to go into the future and mitigate the need for mass car ownership. However, a member of the panel discussion, Alison Percifield, spoke up to say she is actually considering buying a car for the first time in almost 15 years right now, even though she works from home and the price of cars is so expensive.

“I’ve actually been considering buying a car now that I’ve been working remotely full-time to just get out of town more. Going back to work isn’t really a consideration in buying a car,” Percifield said.

Portland Bureau of Transportation planner Zef Wagner echoed Percifield’s perspective, saying the feeling of stuck at home during the pandemic motivated him to buy a car when he previously didn’t have one. Wagner also brought up another interesting point: for people who used to commute to work via transit or bike, getting out of the habit because their jobs went virtual might make them weary of it.

“I worry that the effect on people’s comfort with transit will linger for quite a while,” Wagner said.

Personally, I’m troubled by the association people have between car-ownership and freedom. I understand it, because it has been ingrained in Americans via incessant car ads and infrastructure built for drivers. But I feel far freer without the burdens of making car payments, buying gas and insurance and shelling out for car maintenance – not to mention the hassle of finding a place to park – than I would just by knowing I could hop in my car and head to the coast whenever I wanted to. We need to create systems where people can see all the beautiful scenery that we have nearby without having to drive to get there.

McCourt said developing a system where people without cars can have the same kinds of experiences in the outdoors as people who do is crucial.

“We want to think this through to those pieces of the puzzle so that we can create the environment where if you were at zero auto ownership, you could feel the experience of freedom, you wouldn’t feel trapped,” he said.

There’s a lot to consider when it comes to zero auto ownership, and while we didn’t find the key to it in this discussion, I appreciated hearing what people had to say. The benefits of zero auto ownership are substantial enough for the environment, congestion reduction and health that it’s worth spending more time to analyze how to encourage it on a larger scale, and find out which less-quantifiable factors are leading people to own cars even though they may not need them. Oregon may soon allow cities more leeway to set lower speed limits on dangerous roads — rather than reserving that power for state transportation leaders whose primary interest, historically, has been moving cars as quickly as possible. Combining the carsharing model with electric vehicles and public charging can provide New Yorkers with an affordable and sustainable transportation option when personal car trips are necessary.
There's a lot to like about House Dems' new transportation bill, and a lot to dislike about the new breed of ginormous pickups.