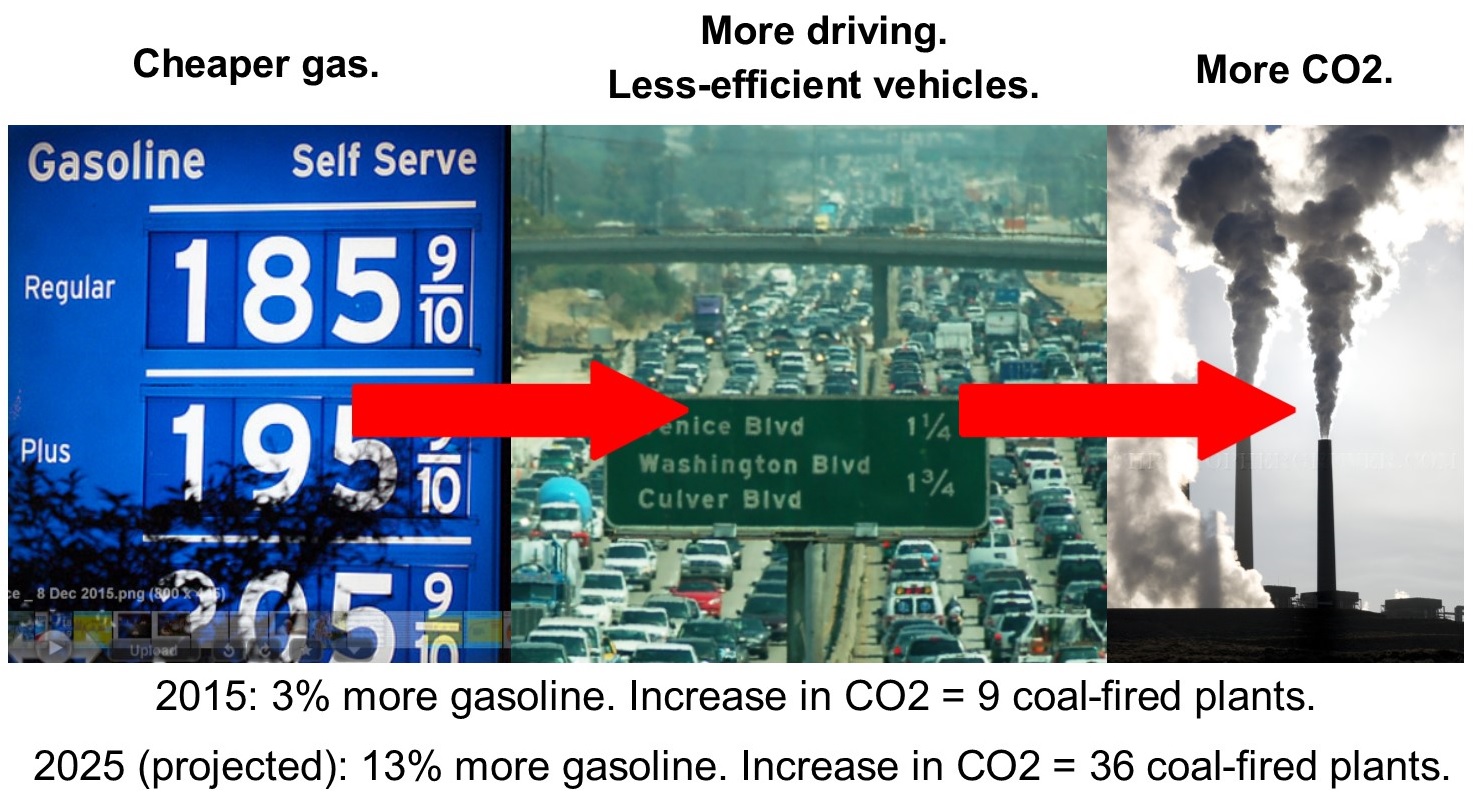 Long-term climate prospects brightened somewhat in 2015. Pope Francis put climate care on the moral and political agenda. President Obama rejected the Keystone XL dirty-oil pipeline. Denialist heads of state were routed in Canada and Australia, and their brethren in the U.S. faced growing ridicule. To cap it off, nearly 200 nations signed the UN Paris accord, committing to cutting emissions. Meanwhile, U.S. coal use took another double-digit plunge. And U.S. electricity generation from zero-carbon photovoltaic solar cells continued to soar and has now grown 20-fold in just five years.

Alas, there’s one bummer in this rosy picture, and it’s a big one: cheap gasoline.

After years of steady gains, average gas mileage of new vehicles purchased in the U.S. fell last year by nearly a mile per gallon, according to data from the University of Michigan’s Transportation Research Institute.

Through September, total miles driven in the U.S. were up 3.5 percent — the biggest rise in decades.

Cheap gas is driving both trends. The average price of gas sold in the U.S. through October 2015 was 25 percent below the 2014 price — the steepest drop in at least 70 years. Americans responded precisely as predicted in Econ 101: by driving more and dumping sedans for SUV’s and pickups.

These twin developments put U.S. gasoline consumption on track to rise at least 3 percent last year. That’s a clear setback for climate. The additional carbon dioxide from the rebound in U.S. gasoline use in 2015 will be the equivalent of a full year’s emissions from nine coal-fired power plants. (My yardstick is 600 megawatts per plant, operating at 70 percent capacity factor. See note at end of post for link to calculations.) And that doesn’t count “upstream” emissions from refining crude oil into gasoline.

Can we be sure this year’s increase in gasoline use is entirely due to the drop in price? Not completely. But the inference is strong.

First, gasoline usage is at least mildly price-sensitive. Based on gasoline’s long-run price-elasticity, a 25 percent drop in price would touch off a 10 percent increase in usage. The entire jump in demand wouldn’t be seen overnight, of course; the lower price would take a decade or so to work its way through car buyers’ purchase decisions and households’ and businesses’ location choices. The 3 percent uptick last year is in line with what one would expect in the initial year.

Second, U.S. gasoline consumption stayed within a fairly narrow band from 2008 to 2014. Prices at the pump held steady as well, except during the worst months of the Great Recession. What was different last year was the plunge in price.

The 2015 jump in CO2 emissions from gasoline is troubling enough. What’s really worrisome is that cheap oil — hence, cheap gasoline — looks like it’s going to be with us for awhile. So say the experts who prepare the government’s Annual Energy Outlook forecast. I recently compared two AEO forecasts of gasoline prices in 2025: the 2012 forecast which preceded the price collapse, and the 2015 forecast which reflects it. Correcting for inflation, the government now projects a 29 percent lower price of gas in 2025 than it projected four years ago.

When you run the lower price forecast through the price-elasticity for gasoline, you get this startling projection: in 2025, U.S. motorists will buy — and burn — nearly 13 percent more gasoline than would have been expected under the earlier (higher) price forecast. The associated rise in U.S. CO2 emissions in 2025 because gas will be cheaper will be huge: it equates to the annual output of 36 coal-fired power plants.

But let’s not stop there. Cheaper crude oil brings not just cheaper gas but cheaper diesel and cheaper jet fuel. I’ve run the reduced 2025 AEO price forecasts for all petroleum products through their respective price-elasticities, and the result is truly scary: Compared to projected 2025 emissions with the pre-plunge price trajectory, lower petroleum prices will result in 450 million metric tons of additional U.S. CO2 emissions in that year.

The increase will equal 8 to 9 percent of today’s U.S. CO2 emissions from all fossil-fuel burning. That will undo almost all of the vaunted reductions in U.S. emissions since 2005. It will be the emissions equivalent of 100 additional coal-fired power plants. And that’s just for the U.S.

The antidote is a carbon tax — either a straight-up carbon tax or a hybrid one that surcharges petroleum products. A surcharge would reflect non-climate harms from oil consumption like traffic congestion while also placing a charge on oil revenues’ corruption of governance in the U.S. and the Middle East.

Former U.S. Treasury Secretary Larry Summers wrote last January that cheap oil created a political opportunity for a carbon tax. I followed that with a call to First Tax Oil, Then Carbon. But to my knowledge no one has quantified how dire the need is — until now.

Cheap oil will make a mockery of just about every scenario to move the U.S. and other countries decisively off carbon fuels. Except scenarios based on carbon taxes.

Note: Calculations of increased oil consumption, resulting increase in CO2 emissions, and coal-plant equivalents, may be found in CTC’s carbon-tax spreadsheet model (Excel file). An earlier version of this post was published on the Carbon Tax Center’s website in December. The Trump administration has eliminated an Obama-era rule to encourage transportation policies that reduce the threat of catastrophic climate change.
For the first time in almost four decades, the nation’s tailpipes now spew out more carbon emissions than the nation’s smokestacks. It’s an indication of how slowly the American transportation sector is rising to the challenge of preventing catastrophic climate change. Over the past 12 months, carbon emissions from cars and trucks have exceeded carbon emissions from electric power — the first time that’s happened […] A coalition of mayors wants Congress to declare a "Marshall Plan" against climate change by spending on mass transit to curb air pollution in their cities. The mayors of Atlanta, Honolulu, St. Paul, Pittsburgh, and Portland, Ore., implored senators at a climate hearing on Capitol Hill last week to invest in renewable-energy programs in order to create jobs and fund bus and rail systems, with the goal of weening people off gas-polluting vehicles.
Image © Peter Calthorpe & Marianna Leuschel Editor’s note: Today we are very pleased to begin a five-part series of excerpts from Peter Calthorpe’s book, “Urbanism in the Age of Climate Change.” Keep reading this week and next to learn how you can win a copy of the book from Island Press. I take as […]