The professional transportation engineers’ association that writes the book on U.S. street design is meeting this week in Seattle — and talking quite a bit about protected bike lanes.

As we reported in January, the American Association of State Highway and Transportation Officials is considering bringing protected bike lanes into the next edition of its widely used Guide for the Development of Bicycle and Pedestrian Facilities.

For that to happen, AASHTO’s design committees will need to vote to include such designs. Based on interviews over the last few weeks, members have some disagreements over the issue but tend to agree that it’s important.

I asked Tony Laird, state highway development engineer at the Wyoming Department of Transportation and vice chair of AASHTO’s technical design committee on non-motorized transportation, what he saw as the major issues in the lead-up to AASHTO’s next bike guide.

“The hottest issue right now is what we’re calling protected bike lanes, what we called cycle tracks for a while,” Laird replied. “There’s a lot of demand for some guidance and consistency for what those look like… I think by the time we put together that new bike guide it’s going to have new guidance on protected bike lanes.”

“The big thing is the bike paths and sidepaths that are being built all over this country,” he said.

Though physically separated bike lanes are only one of several issues on the committees’ plates, it’s one that people remain likely to disagree about.

Lynn Jonell Soporowski of the Kentucky Transportation Cabinet and another member of the non-motorized committee, is dubious about protected bike lanes, saying that Kentucky cities don’t have much room for such facilities.

“It requires a space to do that,” she said. “Yes, they are very effective for cyclists. They are one of the safer ways facilitate on-road bicycle access. But there are also a lot of maintenance understandings.”

AASHTO’s contractor on its next bike guide, Toole Design Group, is just starting its project.

Toole was also the contractor on AASHTO’s last bike guide. In the lead-up to its 2012 publication, Toole prepared a chapter about protected bike lanes, but scrapped the chapter at the request of AASHTO’s member committees.

Next month, Massachusetts is planning to release its own design guide, also prepared by Toole, that includes engineering-level detail about protected bike lanes and intersections.

But the issue that led to AASHTO’s slower action, he said, is valid.

“In certain areas they really didn’t feel there was adequate research,” he said. “It’s kind of a chicken-egg problem: You’ve got to build something and see how it works.”

Because many U.S. cities have now built protected bike lanes despite the relative lack of federal guidance, studies of whether they’re working have become possible.

Transportation is ‘not just about the cars any more,’ AASHTO leaders say

Leaders in the geometric design and general committees said that though they haven’t been closely following debate about protected bike lanes in the bike planning world, they see AASHTO as shifting in general away from prioritizing auto speed and capacity in every situation.

“How do you measure your success?” asked Jeff Jones of the Tennessee DOT, chair of the geometric design committee. “Is it capacity, is it safety, is it cars per hour, passengers per hour? There’s a lot of metrics that are emerging.”

When he was coming into the engineering field, Jones said, that was a question nobody was bothering to ask.

“Roll the clock back 20 years, and you’d say strictly in capacity of vehicles, what are we going to get?” he recalled. “That was the only measuring stick we had.”

Joyce Taylor, chief engineer for the Maine DOT and the new vice-chair of AASHTO’s general subcommittee on design, said many states are under financial and political pressure to balance car transportation against other modes.

“I think all of us in transportation recognize that it’s not just about the cars any more,” she said. “I think where we’re heading is that we just have to talk about design for all of our customers.”

Taylor said that in Maine, the City of Portland is “really pressing us on a lot of this stuff” and that there is also “genuine interest from our department” in learning more about street designs currently available only in non-AASHTO documents.

Years of process still ahead 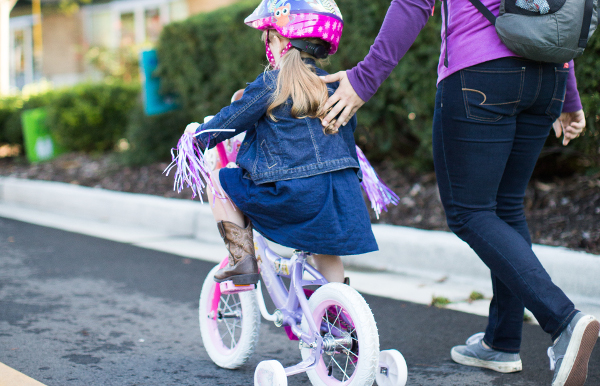 How is the process likely to move forward from here? Several committee members said they expected this week’s meeting to start things moving toward the bike guide update that would be published in 2018 at the soonest.

Jones, the geometric design committee chair, said he expects to designate one of his members as the liaison to its peers on the non-motorized committee.

He hopes that will keep channels open so the committees won’t be surprised when the time comes to sign off on one another’s projects.

Whatever happens, the national consensus about how to build good protected bike lanes will continue to be shaped over the next few years by the other organizations working on the question.

“From my experience, AASHTO, federal highways, NACTO, have all been partnered, and they all play in each other’s sandboxes,” said Soporowski, the Kentucky official. “They come to each others’ meetings, quote each others’ documents, work very effectively together.”

She, too, is sure the next AASHTO bike guide will introduce new designs.

“They’re living documents,” she said. “They’ll always be looking forward to changes. The next one will be different.” Building safe facilities for cyclists is one of the biggest factors in road safety for everyone.
In a significant step forward for American bike infrastructure, the Federal Highway Administration issued a memorandum late last month essentially endorsing street designs like protected bike lanes. In the memorandum, FHWA urges transportation engineers to use the guidelines issued by the National Association of City Transportation Officials, which contains templates for bikeway designs widely deployed […] Protected bike lanes. Protected intersections. They're all included in the draft version of the American Association of State Highway and Transportation Officials' new engineering manual.
A study published in this month’s American Journal of Public Health finds that highly influential transportation engineers relied on shoddy research to defend policies that discourage the development of protected bike lanes in the U.S. In their paper, the researchers point out that male-dominated engineering panels have repeatedly torpedoed street designs that have greater appeal […]