The Oregon Legislature has directed the state’s department of transportation to come up with a value pricing system for interstate freeways in the Portland metropolitan area. A key idea behind value pricing is that it would charge those who use freeways at congested peak hours a higher toll than at other times; tolls might even be zero in off-peak hours, giving travelers strong incentives to use the system when there was available capacity. One of the concerns that’s been raised about value pricing is that it will be an undue burden on the poor or low wage workers who might have little choice but to travel at the peak hour. Bike Portland‘s Jonathan Maus explains how this came up at a recent Portland City Council meeting, in testimony presented by the Oregon Department of Transportation’s public affairs staffer Shelli Romero:

Of course, it’s always possible come up with an anecdote of a struggling minimum wage worker who drives an hour or more each way, always in peak hour traffic, and who would find tolls burdensome.  Although, strangely, this argument seldom seems to be made about those who pay bus fare that’s the same amount regardless of income.

Rather than rely on dueling anecdotes, we thought we’d take a look at the data.  How do the household incomes of those who drive to work compare to those who don’t? The American Community Survey gives us a window into the commuting patterns of the nation’s workers, and lets us look at variations in family income. We’ve used the indispensable IPUMS website to extract data on commuting choices and family income for the Portland metropolitan area.  The data are drawn from the five-year 2011-15 sample, and include all adults (persons aged 18 and older).

First, let’s compare the family incomes of those who travel to work by car with those who either aren’t in the labor force (non-workers). On average, adults who aren’t working (including not in the labor force, unemployed, retired and students), live in households with average incomes of just under $40,000 per year; those who commute to work by car have incomes about 75 percent higher ($73,600). Similarly, those who take transit (median household income of just under $45,000) and those who walk or bike to work (median incomes of just over $42,000) have much lower incomes than those who drive to work.  Overall, the median income of those who commute to work by car is more than 50 percent greater than those who aren’t workers or who travel by other modes.

A second thing to keep in mind is that congestion pricing programs invariably charge higher fees to those who travel at peak travel times. But many workers, especially those with lower wages, don’t work a regular 9 to 5 schedule, and as a result, don’t travel during peak hours.

The American Community Survey provides a useful glimpse of these daily travel patterns. One of the questions it asks is what time workers usually depart on their journey to work.  (Unfortunately, the Census doesn’t ask what time workers usually leave work to travel home).  Nonetheless, ACS  gives us a good picture of which workers are traveling to work in the morning rush hour, so we use this data to divide workers into “peak” and “non-peak” travelers; treating those who routinely leave for work between 7:02 AM and 8:02 AM as “peak” travelers, and everyone else as “non-peak.”

For this analysis, we examine only those who commute to work by car — our objective here being to sort out the relative incomes of peak hour car commuters compared to those who drive to work at non-peak hours.

The following chart shows the results: 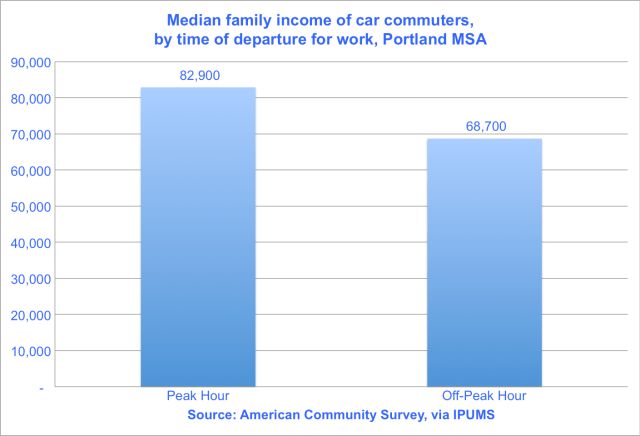 The median family income of those who drive at the peak hour (estimated from the morning peak) is nearly $83,000, about 20 percent higher than for those who drive to work at other hours.

These data suggest that peak hour road pricing predominantly affects those with the highest incomes. Those who don’t work, who travel to work by walking, cycling or transit, and those who commute to work in off-peak hours have incomes that are significantly lower than peak hour road users.

Its also important to note that accommodating peak hour drivers is the most expensive component of the transportation system:  One of the most unfair aspects of our current system of paying for roads is that it charges everyone the same amount, regardless of whether they use the road when its congested or whether they use it when few people are on the road.  A system that shifts more of the cost of the road system to peak hour users is fairer and more progressive than one that ignores mode and time of travel, as today’s road finance system largely does. Far from being inequitable, peak hour pricing asks those who place the greatest demand on the transportation system and have the highest ability to pay, to take financial responsibility.  That, more or less, is the definition of fairness.

Many thanks to the IPUMS team at the University of Minnesota:

Portland wants to put a price on driving on downtown freeways at rush hour. But it will need the Feds' approval.
The best way to ensure that congestion pricing doesn't hurt the poor is to make sure revenues from new tolls support better transit service — not just build more highways.
Mayor Jenny Durkan says she wants to have a true central city congestion pricing system in place by 2021.
If nothing else, gridlocked traffic is a good marketing opportunity for Oscar Mayer’s Wienermobile. US Rep. Anthony Weiner was one of the first voices to speak up against Mayor Bloomberg’s proposal for a three-year congestion pricing pilot project and he remains one of the loudest. In his testimony Oct. 25 before the NYC Traffic Mitigation […]
A new Brookings report says U.S. highway conditions have been improving every year for more than a decade, according to the Federal Highway Administration's own accounting.
Where’s the beef? Under Rep. Anthony Weiner’s plan, vehicles, like the one above, would not be charged a fee to use New York City’s most heavily congested streets On Monday evening, just hours before the federal government’s announcement that it would give New York City $354.5 million to kick-start Mayor Bloomberg’s congestion pricing plan, Rep. […]