Whether they’re selling electric cars to singlehandedly clean our skies, autonomous vehicle technology to end road deaths, or app-taxi services to cure congestion, countless Silicon Valley companies want Americans to believe that their products can solve the enduring transportation challenges of our time. So why haven’t they delivered — and why, in many cases, have they made those problems worse?

In the new book, Road to Nowhere: What Silicon Valley Gets Wrong about the Future of Transportation, author and Tech Won’t Save Us podcast host Paris Marx reveals exactly what’s wrong with the fantasies of some of the most prominent transportation tech “visionaries” of our time, and draws a blueprint for a better mobility system based on truly serving the needs of the many, rather than the whims of the billionaire class.

Streetsblog sat down with Marx to talk about “elite projection,” e-scooter start-ups’ complicated place in the sustainable transportation movement and — of course — Elon Musk. 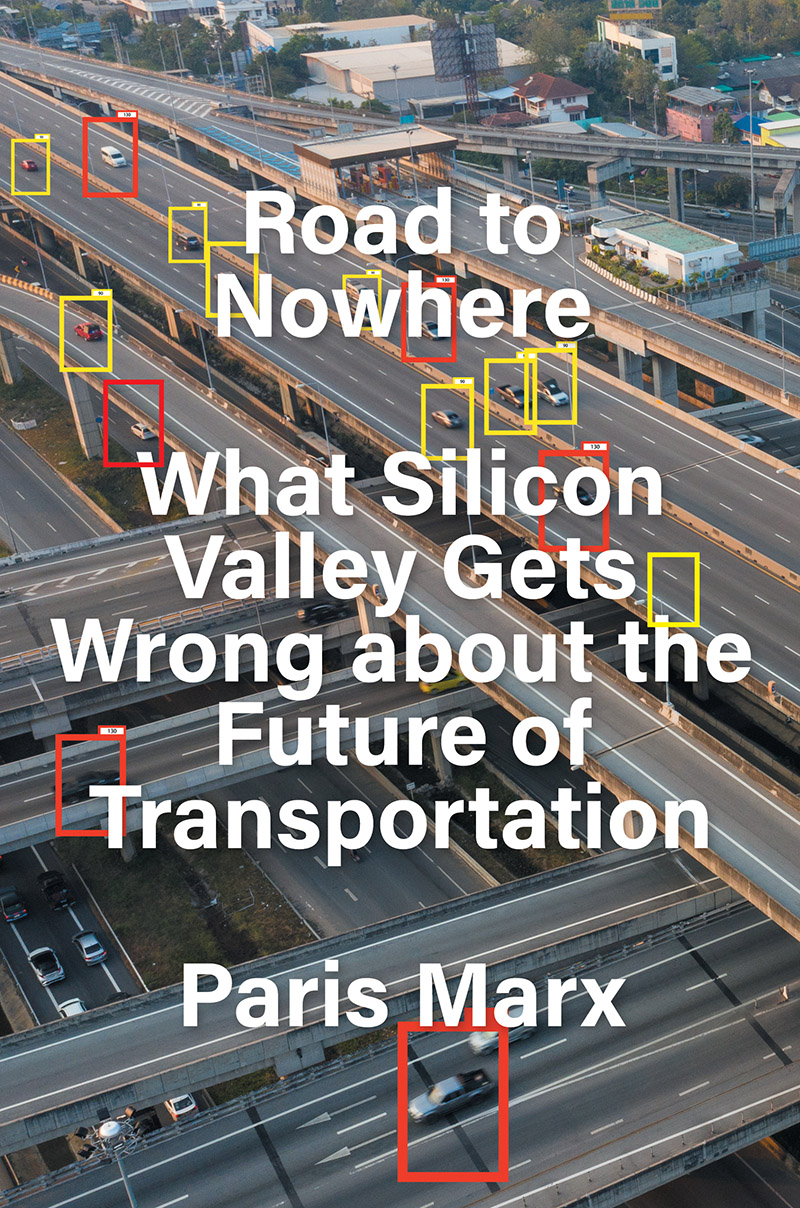 Kea Wilson: You make a strong case in the book that some of the most corrosive threats to our transportation future are coming out of one very particular region of the country, and specifically, a very small group of wealthy people who live and work there. What is the “Californian Ideology,” as you call it in the book, and why is it a problem when it comes to transportation?

Paris Marx: The California ideology is something that was developed by Richard Barbrook, and Andy Cameron in the 1990s. Basically, it [starts with] a belief in individualism and personal liberty, that kind of libertarian approach to things that comes out of the counterculture movement in the ’60s and ’70s and became really influential in the Bay Area. … But in the 1980s, those beliefs began to change as they merged with ideas about the free market and entrepreneurialism that were on the rise when Ronald Reagan was elected and neoliberalism really began to become entrenched.

The California ideology brings those ideas two together. You have these people in Silicon Valley who are saying, “You know, we need to work in the market; we need to take advantage of entrepreneurialism in order to make the world a better place. And we need to do that, specifically, in order to enhance personal liberty.” And the [strategies they preferred were] not through the political system, but rather through through technological development, based on the belief that if we just focus on improving technology, that will naturally improve society.

KW: Not everyone has the same idea about what it means to “improve” the transportation system, particularly those who belong to (or at least live amongst) the billionaire class. You bring up the idea of “elite projection” frequently in the book. What does that mean?

PM: So this is something that transit consultant Jarret Walker talks about a lot, and it’s essentially the idea that these people in Silicon Valley hold a particular place in society, because they typically come from a certain class background and they have a particular experience of the world. And so they experience particular problems with the transportation system — and other things in their day-to-day lives — and then seek solutions to those specific problems.

But just because those are the problems that they face doesn’t mean everyone does, and the particular ways that they think that those problems should be solved don’t always work for the rest of us. And they’re not always solutions that even can be made available to the mass public. In many cases, they only work for a very narrow sliver of the population.

KW: A lot of Elon Musk’s ideas seem like a pretty good example of that, and it’s not surprising that he’s a major character in the book. For folks who aren’t familiar, how did he get the idea for the “Hyperloop” — an concept you suggest he came up with when he, personally, was stuck in traffic, and that was shaped by his well-documented personal distaste for public transportation?

PM: So the idea for the Hyperloop is this kind of vacuum-tube transportation system that will go at really high speeds, and theoretically, be even better than a high-speed train. And this idea is not new — it’s been around for a very long time — but Elon Musk resuscitated it in the early 2010s, at the same moment that California was embarking on a project to build a high speed rail line.

In a biography about him that was written by Ashley Vance, Musk quite explicitly told Vance that one of the reasons why he started to push this Hyperloop system, despite the fact that he had no intention of actually building it on his own, was to fight the high-speed rail system in California, and to ensure that it wouldn’t be built. And so you can really see, in that moment, that Elon Musk has a very particular idea of how the transportation system should work — and he really didn’t want high-speed rail to be part of that system.

Obviously, we can debate his intentions and what he actually hoped to achieve in the long run. But it is quite clear that in proposing the Hyperloop, Musk was not proposing a transportation alternative that was going to be realized in just a few years, but rather putting a fantasy out there that was not going to be built for much longer in the future, in order to try to stifle the high speed rail system.

KW: Some Streetsblog readers might be surprised when they read this book to find that you don’t just criticize the high-tech automotive transportation solutions that Elon Musk and his ilk tend to favor. Tell me a little bit about your critique of the micromobility industry, and how Silicon Valley has negatively influenced the scooter and bikeshare landscape.

PM: So when I talk about micromobility, I start by being very clear on how I define that, because I think that there are some different definitions floating around out there. I’m really talking, specifically, about the dockless bike and scooter services that we saw emerge in the past five or six years. My intention is not really to go beyond that.

When we first started to see these services rolled out, there was a narrative around them that suggested that this technology was going to be an important way through which we might rethink how the streets work, and how space on the streets is distributed. But I think at the same time — and we certainly saw this with the rollout in San Francisco — these companies were immediately taking over the sidewalks and turning them into their roads, or into the storage spaces for their products.

In the early 20th century, we’d already seen people pushed off the streets so that they could become exclusive zones for automobiles. And so right now, I think that one of my issues with the micromobility services is that they’re taking advantage of the little public space for pedestrians that exists right now, and treating it as a free area to store their products. I have real issue with that, because I don’t think that they actually provide the benefits that they claim…

Where we’ve been most successful in expanding the use of bikes and scooters in cities have been in places like Paris, where the city government has been very committed to expanding bike infrastructure. That’s really what encourages people to use those services — not having a bunch of bikes and scooters littered all over the sidewalks, and potentially causing access problems for people with disabilities.

KW: A thing I kept wondering as I read the book was how on Earth we might detangle ourselves from these heavily capitalized, tech-focused transportation companies, particularly considering how many Americans seem to believe they might someday join the billionaire class. You have this quote early in the book from David Hartman about how some capitalists “hoped that auto ownership would overcome class tensions by turning workers into ‘property owners,’ thus giving them a stake in capitalism”; I think it’s pretty fair to say that that tactic has worked on a lot of people. Given America’s attachment not just to the automobile, but to all kinds of transportation options made by and for wealthy elites and sold to the non-wealthy, how do we even begin to build a more democratic and collectively beneficial transportation future?

PM: I think we should remember that when the car initially rolled out in the early part of the 20th century, it was very much something that was used by people who were well-off — and it was the regular kind of working-class people who were being killed, and who were having their access to the street revoked.

But obviously, automotive interests didn’t want the car to only be used by the wealthy because they wanted to sell a lot more cars. And so that’s why streets were remade, and why communities were remade — in order to enable the automobile to turn into a form of mass transportation that everyone can take. As Gartman describes in that quote, part of the driving force behind that [shift] is that once you buy one of these cars, you kind of have a stake in the system, right? So it’s believed that you’ll be less likely to oppose the system, or to push back against it.

This is also something that we see with the effort to expand homeownership. If you’re going to have a mortgage that’s 15 or 30 years, you’re not really going to want to rock the boat and cause any major change to the system as it exists today. Because you’ve bought in, and there’s a perception that you’re going to benefit from the appreciation of that home in the end. Certainly we can see that [among] middle-aged people who bought homes several decades ago, especially in major cities.

To your broader question as to whether we can change this, it’s certainly a difficult thing to do, when we’ve had many decades of people being told that this is the way it should be; this is what modernity looks like; this is the form of transportation that’s most desirable, and that provides us with the most freedom. And I think if we want to try to break those associations, people have to think about transportation and community and our communities in a different way.

The best way to do it is really to draw attention to the flaws in those arguments and the ways that the transportation system actually isn’t working for people — whether it’s the high cost of owning a vehicle or filling it up with gas, or whether it’s all the time that they had to spend stuck in traffic, or whether it’s all the people who have been injured or died because they’ve been hit by cars. [It’s about] drawing attention to these downsides of the system, and showing people that it can work in a different way. Much like autonomous vehicle tech, despite the billions poured into it. Plus, why the climate law is a boon for oil and gas extraction. Alex Davies new book, "Driven: The Race to Create the Autonomous Car," offers a glimpse into an industry that will rapidly upend our transportation landscape — and some worry will kill even more vulnerable road users.