A wildly inaccurate comment from Elon Musk about the traffic impacts of deleting lanes for drivers is prompting a conversation about the little-known phenomenon of “reduced demand” — and how advocates can better debunk common congestion myths that powerful, but often ill-informed, people continue to promulgate.

In a much-tweeted-about comment at the Financial Times “Future of the Car” conference on Tuesday, the Tesla and Boring Company founder dismissed the phenomenon of “induced demand” as “one of the single dumbest notions I have ever heard in my entire life,” despite more than a century of research that confirms that increasing lane capacity for drivers only temporarily relieves gridlock before beefed-up roads attract new motorists and development, miring even more travelers in traffic jams along the new and “improved” corridors.

“If adding roads just increases traffic, why don’t we delete them and decrease traffic?” Musk added. “And I think you’d have an uproar if you did that. … It boggles my mind that people wouldn’t think [building tunnels to curb congestion] would work. … It’s working really well already in Vegas.”

Funny how the CEO of Tesla and founder of the Boring Company keeps insisting that induced demand does not exist. pic.twitter.com/7x6VCUfnFo

Setting aside the fact that the Boring Company’s Las Vegas tunnels are decidedly not working “really well” — not to mention his obvious financial incentive to sell them as a congestion solution — Musk’s comments might make intuitive sense, at least when it comes to the basic geometry of lane removals. After all, a sudden crash that closes a portion of a busy street can result in a traffic jam, at least for a little while; less road space for the same amount of cars can equal more crowding, at least on that specific road, at that specific time, if traffic itself doesn’t inspire a motorist to try another way of getting around.

Decades of research has shown, though, that lane removals often lead to less traffic over time, both on the road that went on the diet and on sometimes even on adjacent corridors. One particularly famous 2002 study of more than 70 lane-reduction projects around the world found that “an unweighted average reduction in traffic on the treated road or area of 41 percent” — and that was before some of the most impactful lane-removal projects in the world, like the tear down of the Cheonggye Expressway in Seoul and or New York City’s famous “Miracle on 14th Street” after the installation of a car-free busway.

So where do all the cars go? Here are three interrelated answers.

When lay people talk about city “congestion,” they’re usually really talking about congestion along the handful of routes that they travel most — and in American cities, that usually means the massive highways, arterials, and “collector” roads that most drivers are forced onto for at least part of their long-distance commutes.

In a well-planned city, though, drivers have a choice to take a route that doesn’t necessarily involve sitting in traffic on the big mega-thoroughfare that pretty much every other motorist takes — because there’s a network of parallel roads running just a block or two away. And when the mega-road loses a few lanes, it discourages drivers from using it even more, encouraging motorists to fan out across the grid in the process.

Daniel Herriges of Strong Towns illustrated it eloquently in a 2019 article:

Here’s a grid of city streets with a four-lane stroad running east-west through the middle. As drivers enter the area from the east and west, the stroad [the wide, four-lane road in the image below] is the widest, fastest, and most direct route through town, so most of them use it, with the exception of the small handful of drivers whose actual final destinations are on the side streets…

At rush hour, there are more drivers present, and the stroad starts to get congested. Eventually, it slows down to the point where it’s no longer any faster than the side streets. At this point, additional drivers will use those side streets. 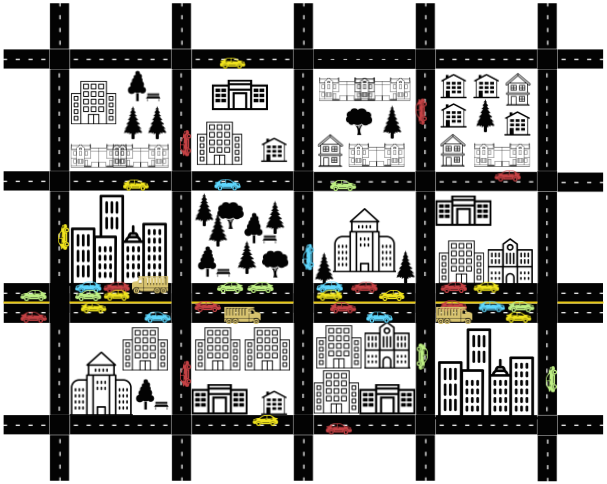 Now let’s look at what happens if we shrink the stroad to a two-lane street…Drivers entering the area see several routes that are all of roughly equivalent speed and convenience. So they naturally spread out. This is the same number of cars as shown above (the peak, rush-hour level of traffic) distributed across the grid: 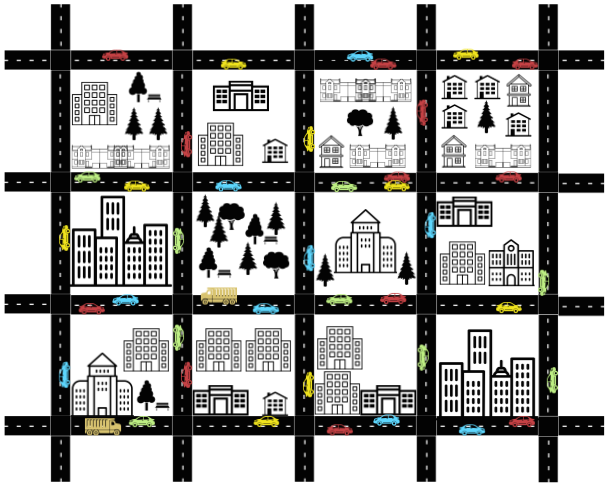 Every street ends up handling a moderate amount of traffic. No street is terribly congested even at the busiest time of day.

2. Drivers change how — and when — they travel

Of course, spreading traffic more liberally across a city grid might sound like bad news for sleepy neighborhood side streets. Research shows, though, that that doesn’t always happen — because despite what automakers like Elon Musk are incentivized to believe, the number of cars on the road are not a fixed constant that city leaders can’t change.

Most obviously to anyone who’s ever left work a little early to beat the rush hour, often motorists can and do change when they drive their most frequent routes — and when the roads along those routes are put on a diet, they have an even bigger incentive to adjust their schedules. Other drivers might be a little more thoughtful before they hop in the SUV to drive half a mile back and forth to the grocery store if they know the road they’ll drive on might be a little less comfortable, and combine that trip with another errand later in the day.

There’s even evidence that motorists that do still choose to drive actually behave differently behind the wheel on skinnier and better-controlled roads. One British study found that drivers were actually more likely to make it through shorter green lights on a new bus-priority corridor, because they were staying attentive and keeping their feet hovered over their gas pedals, ready to press them the moment the signal changed.

Put it all altogether, and that same 2002 study of lane reduction projects around the world found that “less than half of [traffic eliminated on the ‘dieted’ road] reappeared as increased traffic on alternative roads, at the same or different times of the day … Thus the average overall reduction in traffic was 25 per cent of that which used to use the affected road or area.” (Emphasis ours).

Or, as City Observatory’s Joe Cortright once put it:

If you assume that traffic is a kind of incompressible liquid, you’d expect that banning cars on one street would automatically produce gridlock on adjacent streets. That actually hasn’t turned out to be the case. … Here’s the point: road capacity doesn’t so much relieve traffic as it creates it. When we reduce the capacity of a system to introduce cars into a city center, we get fewer cars.

3. Drivers pick other modes — if they can

Perhaps the single best argument against lane removals in U.S. is that, at least in communities with terrible support for transit, biking, and walking and poor network planning, some motorists may have no other real choice but to drive the same routes they always did.

And that’s also the single best argument for investing in other modes — something lane removals themselves can help do.

In many cases, road “diets” are really just road transformations that convert yet another driving lane into wider sidewalks, protected cycling paths, safer bus stops, quicker bus lanes, new light rail, added green space and more. Lane removals often give communities more mobility options, often without even removing much of anything for the motorists who continue to drive, besides a troubling incentive to travel thoughtlessly along one specific, highly congested corridor at every hour of the day.

As recently as this week, a road project in Chicago that added bus-boarding islands and semi-protected bike lanes by reducing a four-lane road to three lanes was shown to have not caused any “major congestion or slowdowns” of overall traffic in the region, while simultaneously slowing the dangerously fast average speeds along the target corridor by 10 percent.

Perhaps the most accurate part of Musk’s comment, of course, is that lane reductions often cause “uproar,”despite the tomes of research about their benefits to overall congestion, safety, local economies, emergency response times, and more. Thanks to decades of institutional roadblocks and community pushback, America has far more stories of road expansions — and road diet rollbacks — than it has stories of highways transformed to boulevards.

Of course, that’s not a good reason to throw in the towel and start digging tunnels for cars that will only invite more induced demand (if they can even be dug at all). But it is a good reason for advocates to organize, and work hard to connect the benefits of lane removals — including “reduced demand” — directly to the issues that residents care about most, so we can finally build sustainable infrastructure where drivers’ exclusive right of way once was. Elon Musk is in trouble again. Plus, the car-selling business is a racket, people should keep working from home and more headlines.