Why You Should Never Sit Next to a Breakaway Post

Editor’s note: A version of this article originally appeared on Strong Towns and the Dear Winnipeg blog and is republished with permission. It is focused on Winnipeg, Canada, but the policies and infrastructure it discusses are relevant to the United States as well.

It seems like every time there’s a news piece about a traffic collision involving a pedestrian, it’s followed by a flurry of discussion over the words used to describe the incident.

Take for instance a crash on Portage Avenue in Winnipeg, Canada that took place just over a week ago. This was the original headline: 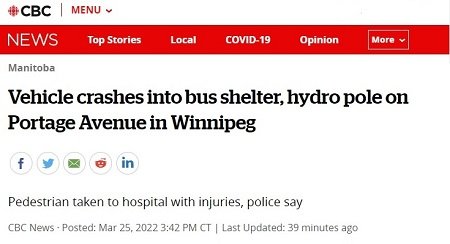 Understandably, people reading were upset that the broken bus shelter and hydro pole got higher billing than the actual human being that had to be taken to hospital. CBC quickly corrected the headline: 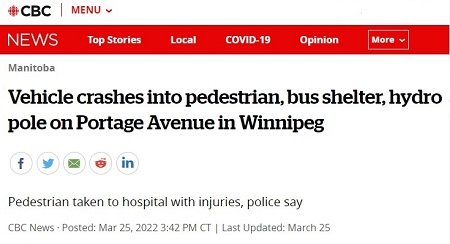 Much better. Yet, still not good enough. Because some people will point out, rightly, that vehicles have drivers. And for the same reason we don’t ever see headlines such as “Man shot by gun”, or “Chris Rock slapped by hand”, the headline here should have read “Driver crashes into pedestrian, bus shelter, hydro pole on Portage Avenue in Winnipeg”.

It makes sense. Using “vehicle” or “car” is very neutral language, and it tends to remove personal responsibility from the situation. Using “driver” reminds us of the human behind the crash, and subconsciously makes it easier to attribute blame for it.

And I completely understand that urge. Except I don’t think it’s that helpful, because in the overwhelming majority of cases, the driver is not to blame for the carnage. The traffic engineers who designed the street are, because drivers can only do what the design lets them.

Let me be clear: this was no accident. Massive property damage and pedestrians being injured (or killed) is our transportation system functioning precisely as designed. This is how it was designed to work. To understand that, we’ll need to explain a few traffic engineering concepts. So let’s get into it!

The traffic engineering profession understood a long time ago that humans are imperfect and will always make mistakes. It’s inevitable, and if you can’t change the users, change the system. So traffic engineers came up with the concept of “forgiving design” which was a way of designing the transportation system to “forgive” errors by drivers, so that when they made the most common mistakes, whether unintentional or through carelessness, the results didn’t end up being catastrophic.

One of those elements is the development of the “clear zone”. Now, I’ve talked about clear zones before, but this is worth repeating, so bear with me if you know all this already.

What is a Clear Zone? The Manual on Uniform Traffic Control Devices gives us a pretty straightforward definition:

The total roadside border area, starting at the edge of the traveled way, that is available for an errant driver to stop or regain control of a vehicle.

Basically, it’s a buffer zone on the edge of the road to allow for out-of-control stray cars. Of course, the Manual says you want to keep this zone clear of any fixed objects, things like signs, trees, light standards, etc., because vehicles slamming into immovable objects at high speeds is really dangerous for the occupants of those vehicles.

So how big does this buffer need to be? The answer is it depends on the speed of traffic. The faster the vehicles are travelling, the larger the clear zone you need. And lucky for us, traffic engineers have gone through the trouble of doing those calculations.

On page 77 of Winnipeg’s Transportation Standards Manual are the guidelines for our own city’s “clear zones”. City engineers say that at traffic speeds of 60 km/h, the clear zone should be a minimum of 3.5m from the face of the curb, but that 5.0m is desirable.

Now, it’s important to pause here to recognize that these concepts were developed for highways. And they saved a lot of lives in that context. But, when you don’t acknowledge that urban areas are fundamentally different places than highways, you get some pretty messed up results.

For example, here’s what the required clear zone looks like on a typical block of Henderson Hwy in my neighborhood: 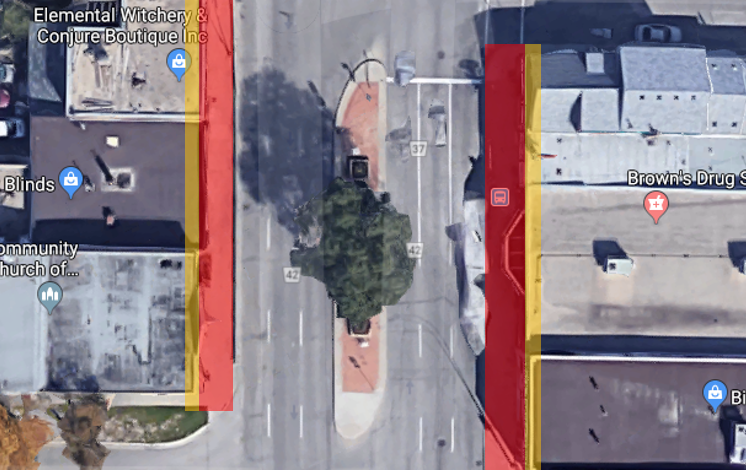 If you want to see an example in 3-D, here’s what the site of that aforementioned crash on Portage Avenue looks like with the clear zone delineated: 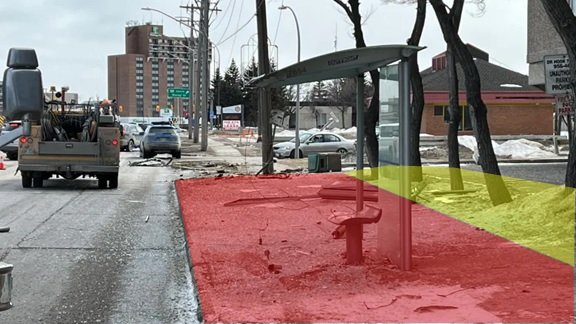 These are the “zones” that are supposed to stay “clear” of any immovable objects because of the very real possibility of cars leaving the roadway. And yet, this is where we tell people to walk, wait for the bus, and access local businesses. You can see the inherent conflict.

But surely cars leave the roadway so infrequently as for this to be insignificant, right?

My friend, surely you jest.

This is an occurrence so common that traffic engineers had to invent a whole new technology in order to keep “forgiving” the mistakes of drivers. Ladies and gentlemen, I present to you: the breakaway base! 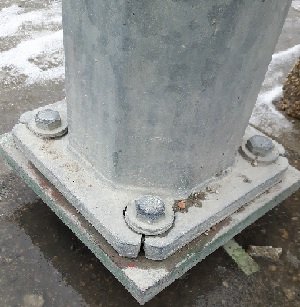 The breakaway base was devised as a way to still be able to put objects in the clear zone without endangering the lives of vehicle occupants. Instead of a vehicle leaving the road, smashing into a stationary, immovable street light and killing everyone on board, the bases are equipped with shear pins that are designed to break when hit with any real force. The result is the pole snaps off its base at the moment of collision, and most of the kinetic energy of the collision is dissipated away from the occupants of the vehicle.

But that leads to an obvious question regarding the placement of this bus bench: 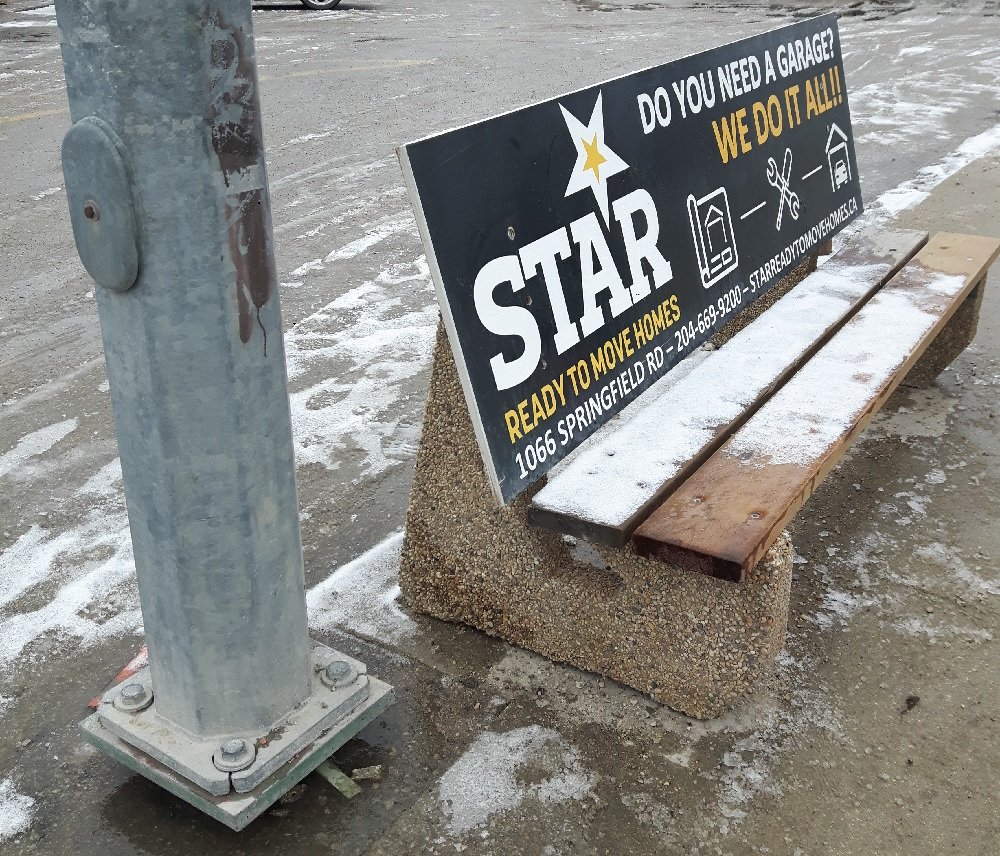 If vehicles leave the roadway often enough that we need street lights to have breakaway bases to keep vehicle occupants safe, how can it be safe for pedestrians and transit riders to sit, stand or walk in that same space?

The answer is, it’s not. [Even though you could argue that pedestrians have breakaway bases themselves…]

From 2012 to 2020, there were 179 (reported) collisions where a vehicle left the roadway in urban areas in Manitoba, according to Manitoba Public Insurance collision statistics. In 36% of those, someone was injured. In 6% of them, someone died.

But those weren’t accidents. Traffic engineers designed urban streets that required a clear zone, designed breakaway bases for the infrastructure in those clear zones due to the expected frequency of collisions, and then placed their professional seal on a plan that puts people, sidewalks, bus stops and businesses in the very same clear zones.

As well-known traffic safety advocate Tom Flood has said, “these aren’t accidents, these are results.”

These aren't accidents, these are results. pic.twitter.com/vkH8jEPbHR

And the only reason it’s not even worse is because of congestion. Congestion slows traffic to a speed where clear zones shrink to zero, which solves this entire problem for us. Unfortunately, the traffic engineering profession seems to have taken it as its raison d’être to alleviate congestion, which just puts people back into the clear zone, and back into mortal danger.

But, try talking to a traffic engineer about making sure people aren’t forced to walk, wait for the bus, or access local businesses while in the clear zone, and you’ll get blank stares.

And it is probably at least some of those things.

But it’s not like there’s no solution here. A common suggestion is to line the sidewalks with bollards.

And that would work… for the pedestrians and transit riders. But remember the whole reason for the breakaway bases? That vehicles smashing into immovable objects at high speeds is dangerous for the occupants of those vehicles?

Yeah, simply installing a bunch of bollards and calling it a day is just shifting the risk of death from people outside vehicles to those inside vehicles. That’s hardly ethical either.

But we could design our streets for slower speeds, just like congestion has shown us works. That’s actually what the World Health Organization recommends, and not just in residential areas. They recommend maximum speeds of 30 km/h wherever “people and traffic mix“. It’s a policy that recognizes that there are places for high speeds, and there are places for slow speeds. And the places for slow speeds are wherever people walk, live, work and play, which has advantages far beyond just safety, such as economic activity, climate action, livability, and as we’ve measured here before many times, financial sustainability for the City.

To do otherwise is to ask people to spend time in the clear zone, literally putting their lives at risk just to wait for a bus, or buy a jug of milk, or walk to the dentist. An ask so egregious, that any engineer who would agree to affix their seal to that should lose their license to practice. Yet somehow they don’t.

Because most people don’t know about clear zones and breakaway bases. So there’s no one to call them out on it.

But now you know.

So the next time you’re walking down the street, or waiting for a bus, or walking up to a local shop, and you walk by a pole with a breakaway base, remember that means you’re standing where out-of-control cars have been designated to go: in the clear zone. 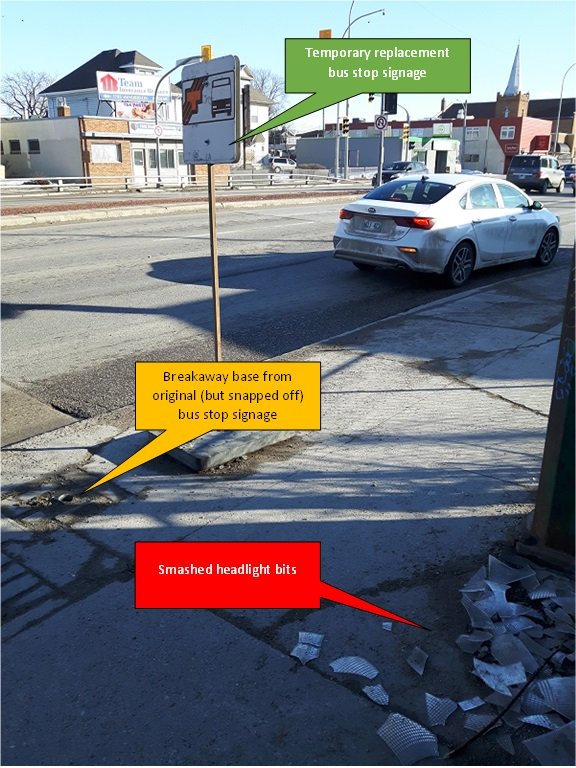 Knowing this, you can choose to stay silent and be complicit, as the City spends $50,000 on marketing to attract more people to stand in the clear zone take the bus. You can choose to say nothing as the City prepares to spend $10 million on amenity upgrades to get more people to walk, sit, eat, drink, shop and spend more time in the clear zone in public spaces Downtown.

So talk to your friends about it. Talk to your family, your colleagues, your Councillor. Just as importantly, talk to any candidate seeking your vote in this fall’s election. This abhorrent practice has to end, and ending it starts with you.

Finally, one last request for those of you who work in the media: consider changing how you report on this stuff in the future. 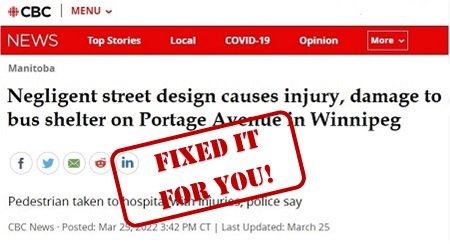 If a snowy winter is guaranteed year after year, not budgeting for proper winter maintenance for all modes of transportation, then using winter as an excuse for not being able to implement high quality bicycle infrastructure is like refusing to buy apples and then complaining you can’t make applesauce.
“Something big is definitely brewing in Canada.” That’s the word from Michael Andersen at People for Bikes, which monitors Twitter for news on protected bike lanes around the English-speaking world. Vancouver’s investment in bike infrastructure paid off with a 64 percent spike in bike traffic from 2013 to this year. And Andersen says Canada as a whole has […] It's a great innovation, but not every Canuck is happy about it — even among sustainable transportation advocates.
Urban real estate is a hot commodity in Canada. Suburban real estate, not so much. PricewaterhouseCoopers, in coordination with the Urban Land Institute, analyzed urban and suburban properties and found a lot more office space in the central city worth buying or holding than in the burbs [PDF]. For its 2014 Emerging Trends report, one […] The reason? Canada has better laws and far more mass transit use.