Wishing for "Truly Open Streets" in 2015

It’s a new year, and around the Streetsblog Network people are posting their 2014 retrospectives and resolutions for the year ahead.

Kristen Jeffers at The Black Urbanist shares these thoughts to kick off 2015: 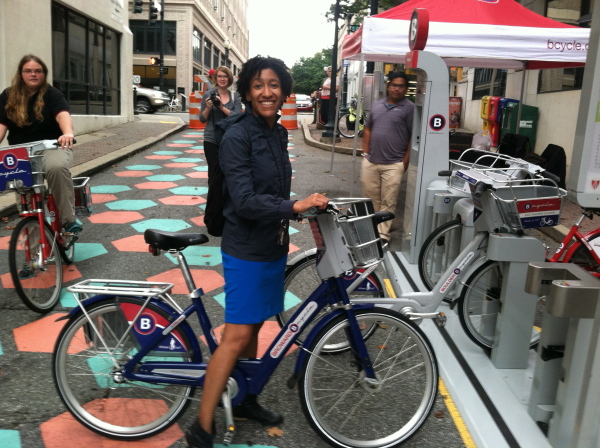 Remember this picture of me? I was playing on a B-cycle demonstration bike on the street that I helped paint, to have an open streets event there. Yet, from then to now, not just in Greensboro, but in many other cities, the streets haven’t been so open. In fact, many have been hostile. My wish is that we can start looking at people on our streets, not as threats, not as people to shake money out of, not as places to speculate our real estate futures and to shoot to kill, but as places where we can celebrate our achievements and what it means to be human. I might be wishing this every year, but I’m going to get us started there. If we block the streets in 2015, I pray that it’s to have a party, be at peace and be better neighbors.

Elsewhere on the Streetsblog Network: The Urbanist wraps up its first year covering Seattle with a look at its 10 most-read stories of 2014. Greater Greater Washington celebrates the opening of a new car-free bridge that improves walking and biking access to the Rhode Island Avenue Metro station. And Bike Portland writes that the city’s evolving bike culture bodes well for the future.

Two years into Kenney's tenure, it already seems unlikely that he'll achieve his promise to improve the bike network.
Boston's latest do-it-yourself bike lane intervention might seem a bit sketchy -- because it uses comics to prod City Hall for needed safety improvements.
Yesterday, we published part one of my interview with Peter Norton, a historian at the University of Virginia and the author of Fighting Traffic: The Dawn of the Motor Age in the American City. We talked about whether the push for infrastructure investment is always code for increasing car capacity, and how the Vision Zero campaign […]
From the Texas Panhandle to the Bay Area, from the shores of the Detroit River to the Gulf Coast of Florida — America’s cities are a pockmarked mess, blighted by asphalt parking expanses you can practically see from space. Streetsblog readers submitted two dozen horrendous parking craters for consideration in this year’s Parking Madness tournament, and the editors picked 16 to vie […]
Even the capital of Albania has more school streets per capita than New York City.
It’s almost time to say goodbye to 2015, which means we’re about to hand out Streetsies to recognize achievements for walking, biking, and transit in American cities this year. Earlier this month we asked readers for nominations for the Best Urban Street Transformation of the year, and here are the standouts from your submissions. It’s a great batch and […]