If there’s one thing American planners fear, it’s that someone, sometime, somewhere, won’t be able to immediately find a parking space. Gigantic manuals have been devoted to avoiding this “problem,” and laws have been passed in nearly every community in the nation to ensure that no one ever lacks for parking.

Chuck Marohn at Strong Towns started an ingenious, crowd-sourced photo collection to show how absurd the obsession with parking construction has become: pictures of retail parking lots on Black Friday, one of the busiest shopping days of the year. We’ve built so much parking that a lot of spaces remain unused even when demand is at its peak.

For the last two years, Marohn has urged people to take photos of half-empty Black Friday parking lots and tag them on Twitter with the hashtag #blackfridayparking. Here’s what they turned up last week.

Marohn himself snapped this Target parking lot (presumably somewhere near his hometown of Brainerd, Minnesota), which at 75 percent occupancy, was actually more full than most the other lots he photographed. Reader also captured this majestic asphalt expanse at a Big K Mart in the same region. At 3:15 in the afternoon, this Target parking lot in suburban Pittsburgh was less than half full, reports Bob Gradeck: 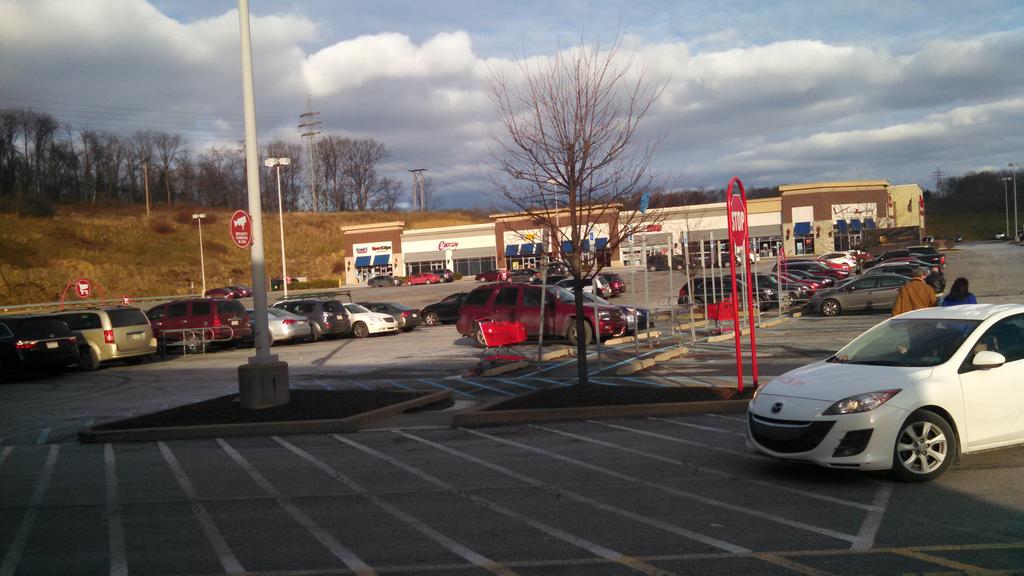 Did any of you make it out to the stores on Friday? Did any of you have trouble finding a parking space? Did anyone in America have this problem?

It’s standard practice to build parking lots to accommodate the maximum number of vehicles expected on the busiest shopping day of the year. As a result, acres and acres of unnecessary asphalt make communities less walkable, waste land, funnel polluted runoff into our groundwater, erode tax bases, and drive up prices for lots of other […]
On Black Friday, Chuck Marohn of Strong Towns asked his Twitter followers to take pictures of parking lots on one of the busiest shopping days of the year. The evidence they returned was pretty damning: Retailers like Walmart, Kohl’s, and Target — some compelled by mandatory parking minimums — provide way more parking than shoppers will ever […]
Are you ready for Parking Madness 2014, our second annual search for parking craters that have obliterated cities? You better be. Last year, Tulsa took home the Golden Crater. In this year’s tournament, we broadened the field to accept entries from outside the United States. Perhaps not surprisingly, American parking craters still dominated the reader […]
It’s no coincidence that the most dangerous streets in many communities are the ones in front of big box stores. As a rule, big boxes generate a lot of motor vehicle traffic — and they tend to be a nightmare to navigate without a car. Even though the industry is shifting and some mega retailers have started […]
At the peak of its parking investment, Walmart was building six parking spaces per thousand square feet of store. But that's changed.
Alan Durning is the executive director and founder of Sightline Institute, a think tank on sustainability issues in the Pacific Northwest. This article, originally posted on Sightline’s blog, is #9 in their series, “Parking? Lots!” Have you ever watched the excavation that precedes a tall building? It seems to take forever. Then, when the digging […]