So Much for Austerity: Wisconsin Builds $25 Million Interchange in Cornfield

Remember Scott Walker from Wisconsin? He’s the governor who was so horrified by the mere possibility of government subsidy for transportation that he was willing to turn away $800 million in federal money for high-speed rail during a horrible recession.

After that, we were fairly certain Scott “No-Train” Walker was going to spend his entire term rooting out government waste, leaving no stone unturned nor any sacred cows un-gored. So imagine our surprise to learn that now, at this very moment, the man who claims to hate government waste so much is busy building what can only be described as a $25 million interchange to nowhere.

To be fair, the Pabst Farms interchange wasn’t originally planned to extend into cornfields roughly 30 miles outside of Milwaukee. When the state agreed to have local taxpayers pick up 93 percent of the project’s costs, it was supposed to deliver motorists to a mall. But then there was that whole massive real estate crisis. Now Pabst Farms is still mostly a whole lot of nothing.

You’d think this is the type of thing that would really raise Governor Walker’s ire. But not so, according to James Rowen at The Political Environment, who reports that the project is speeding along:

Still some nice corn growing out in Pabst Farms between the Interstate and some of the project’s residential and commercial developments, but … 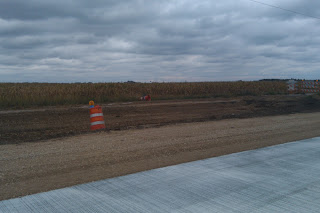 The road work is proceeding and the area will have a new grid, and there’s still no mall, but the powers that be have insisted on this project for years, though the marketplace has been singing a different tune.

Quick: Someone remind Scott Walker he hates government waste! Or does he?

Elsewhere on the Network today: Orphan Road uses industry data to refute the common misperception that high-rise housing is (much) more expensive than low-rise. Bike Delaware shares the result of a study that found cyclists inhale more soot than pedestrians, but their increased activity more than offsets the health consequences. And Pedestrian Observations wonders whether creeping suburban poverty is really such a new thing.

If Midwest states shovel billions more into highway widenings (likely), it could just increase maintenance costs and further undermine their cities.
Just a few months ago, a handful of governors made a big show of their “budget consciousness” by torpedoing passenger rail projects. Given that highway projects represent a much larger share of a state’s spending, we might expect these fiscal watchdogs to be tamping down on road construction with equal fervor. That does not appear […]
Ramming highways through the middle of American cities was undoubtedly one of the worst mistakes of the 20th century — demolishing urban habitat, dividing neighborhoods, and erecting structures that suck the life out of places. What could be worse than a highway through the middle of town? How about when two highways intersect, with all […]
In the politically polarized Milwaukee region, there are two widely divergent visions of what transportation should do. There’s the Waukesha vision, which might be summarized as all highways, no transit. This suburban Republican stronghold — one of the most conservative counties in the country — has for years been systematically severing the already limited transit connections […]
Highway costs have nearly doubled WisDOT's projections, and the overruns will be even bigger for projects that are still in the works. But Governor Scott Walker isn't interested in reining in highway spending.
We’ve been watching how governors around the country are getting extra “creative” as they try to keep their transportation budgets solvent. Yesterday we witnessed an excise tax on bicycles floated in Washington State. But the award for the wildest funding scheme may go to renowned highway spender Governor Scott Walker in Wisconsin, who wants to […]